From wiki.gis.com
Jump to: navigation, search
Abstraction is the process or result of generalization by reducing the information content of a concept or an observable phenomenon, typically to retain only information which is relevant for a particular purpose. For example, abstracting a leather soccer ball to a ball retains only the information on general ball attributes and behavior. Similarly, abstracting happiness to an emotional state reduces the amount of information conveyed about the emotional state. Computer scientists use abstraction to understand and solve problems and communicate their solutions with the computer in some particular computer language. 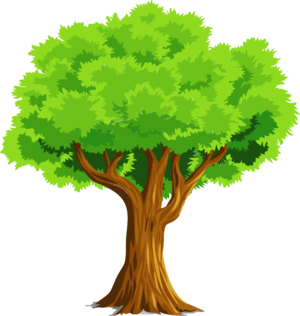 The abstract idea of a tree can be represented like this, although every person has their own mental image of what a tree looks like. In reality, trees are much more complicated than the image above, and display wild variation.

In philosophical terminology, abstraction is the thought process wherein ideas[1] are distanced from objects.

Abstraction uses a strategy of simplification, wherein formerly concrete details are left ambiguous, vague, or undefined; thus effective communication about things in the abstract requires an intuitive or common experience between the communicator and the communication recipient. This is true for all verbal/abstract communication.

For example, many different things can be red. Likewise, many things sit on surfaces (as in picture 1, to the right). The property of redness and the relation sitting-on are therefore abstractions of those objects. Specifically, the conceptual diagram graph 1 identifies only three boxes, two ellipses, and four arrows (and their nine labels), whereas the picture 1 shows much more pictorial detail, with the scores of implied relationships as implicit in the picture rather than with the nine explicit details in the graph.

Conceptual graph for A Cat sitting on the Mat (graph 1)

Although the description sitting-on (graph 1) is more abstract than the graphic image of a cat sitting on a mat (picture 1), the delineation of abstract things from concrete things is somewhat ambiguous; this ambiguity or vagueness is characteristic of abstraction. Thus something as simple as a newspaper might be specified to six levels, as in Douglas R. Hofstadter's illustration of that ambiguity, with a progression from abstract to concrete in Gödel, Escher, Bach (1979):

(5) my copy of the May 18 edition of the Chronicle

(6) my copy of the May 18 edition of the Chronicle as it was when I first picked it up (as contrasted with my copy as it was a few days later: in my fireplace, burning)

An abstraction can thus encapsulate each of these levels of detail with no loss of generality. But perhaps a detective or philosopher/scientist/engineer might seek to learn about some thing, at progressively deeper levels of detail, to solve a crime or a puzzle.

Abstractions sometimes have ambiguous referents; for example, "happiness" (when used as an abstraction) can refer to as many things as there are people and events or states of being which make them happy. Likewise, "architecture" refers not only to the design of safe, functional buildings, but also to elements of creation and innovation which aim at elegant solutions to construction problems, to the use of space, and at its best, to the attempt to evoke an emotional response in the builders, owners, viewers and users of the building.

Things that do not exist at any particular place and time are often considered abstract. By contrast, instances, or members, of such an abstract thing might exist in many different places and times. Those abstract things are then said to be multiply instantiated, in the sense of picture 1, picture 2, etc., shown above.

It is not sufficient, however, to define abstract ideas as those that can be instantiated and to define abstraction as the movement in the opposite direction to instantiation. Doing so would make the concepts 'cat' and 'telephone' abstract ideas since despite their varying appearances, a particular cat or a particular telephone is an instance of the concept "cat" or the concept "telephone". Although the concepts "cat" and "telephone" are abstractions, they are not abstract in the sense of the objects in graph 1 above.

We might look at other graphs, in a progression from cat to mammal to animal, and see that animal is more abstract than mammal; but on the other hand mammal is a harder idea to express, certainly in relation to marsupial or monotreme.

A physical object (a possible referent of a concept or word) is considered concrete (not abstract) if it is a particular individual that occupies a particular place and time.

Abstract things are sometimes defined as those things that do not exist in reality or exist only as sensory experience, like the color red. That definition, however, suffers from the difficulty of deciding which things are real (i.e. which things exist in reality). For example, it is difficult to agree to whether concepts like God, the number three, and goodness are real, abstract, or both.

An approach to resolving such difficulty is to use predicates as a general term for whether things are variously real, abstract, concrete, or of a particular property (e.g. good). Questions about the properties of things are then propositions about predicates, which propositions remain to be evaluated by the investigator. In the graph 1 above, the graphical relationships like the arrows joining boxes and ellipses might denote predicates. Different levels of abstraction might be denoted by a progression of arrows joining boxes or ellipses in multiple rows, where the arrows point from one row to another, in a series of other graphs, say graph 2, etc.

Abstraction in philosophy is the process (or, to some, the alleged process) in concept-formation of recognizing some set of common features in individuals, and on that basis forming a concept of that feature. The notion of abstraction is important to understanding some philosophical controversies surrounding empiricism and the problem of universals. It has also recently become popular in formal logic under predicate abstraction. Another philosophical tool for discussion of abstraction is Thought space.

The way that physical objects, like rocks and trees, have being differs from the way that properties of abstract concepts or relations have being, for example the way the concrete, particular, individuals pictured in picture 1 exist differs from the way the concepts illustrated in graph 1 exist. That difference accounts for the ontological usefulness of the word "abstract". The word applies to properties and relations to mark the fact that, if they exist, they do not exist in space or time, but that instances of them can exist, potentially in many different places and times.

Reification, also called hypostatization, might be considered a formal fallacy whenever an abstract concept, such as "society" or "technology" is treated as if it were a concrete object. In linguistics this is called metonymy, in which abstract concepts are referred to using the same sorts of nouns that signify concrete objects. Metonymy is an aspect of the English language and of other languages. It can blur the distinction between abstract and concrete things:

1805: Horatio Nelson (Battle of Trafalgar) - "England expects that every man will do his duty"

An abstraction can be seen as a process of mapping multiple different pieces of constituent data to a single piece of abstract data based on similarities in the constituent data, for example many different physical cats map to the abstraction "CAT". This conceptual scheme emphasizes the inherent equality of both constituent and abstract data, thus avoiding problems arising from the distinction between "abstract" and "concrete". In this sense the process of abstraction entails the identification of similarities between objects and the process of associating these objects with an abstraction (which is itself an object).

For example, picture 1 above illustrates the concrete relationship "Cat sits on Mat".

For example, graph 1 above expresses the abstraction "agent sits on location".

This conceptual scheme entails no specific hierarchical taxonomy (such as the one mentioned involving cats and mammals), only a progressive compression of detail.

The neurology of abstraction

Some research into the human brain suggests that the left and right hemispheres differ in their handling of abstraction. For example, one meta-analysis reviewing human brain lesions has shown a left hemisphere bias during tool usage [2].

Typically, abstraction is used in the arts as a synonym for abstract art in general. Strictly speaking, it refers to art unconcerned with the literal depiction of things from the visible world[3]--it can, however, refer to an object or image which has been distilled from the real world, or indeed, another work of art. Artwork that reshapes the natural world for expressive purposes is called abstract; that which derives from, but does not imitate a recognizable subject is called nonobjective abstraction. In the 20th century the trend toward abstraction coincided with advances in science, technology, and changes in urban life, eventually reflecting an interest in psychoanalytic theory.[4] Later still, abstraction was manifest in more purely formal terms, such as color, freed from objective context, and a reduction of form to basic geometric designs. [5]

In music, abstraction refers to the abandonment of tonality. Atonal music has no key signature, and lacking an externally imposed standard, is characterized by its internal relationships.[6]

Jung's definition of abstraction broadened its scope beyond the thinking process to include exactly four mutually exclusive, opposing complementary psychological functions: sensation, intuition, feeling, and thinking. Together they form a structural totality of the differentiating abstraction process. Abstraction operates in one of these opposing functions when it excludes the simultaneous influence of the other functions and other irrelevancies, such as emotion. Abstraction requires selective use of this structural split of abilities in the psyche. The opposite of abstraction is concretism. Abstraction is one of Jung's 57 definitions in Chapter XI of Psychological Types.