From wiki.gis.com
Jump to: navigation, search
"Accuracy" redirects here. For the song by The Cure, see Three Imaginary Boys.

In the fields of engineering, industry and statistics, accuracy is the degree of closeness of a measured or calculated quantity to its actual (true) value. Precision, also called reproducibility or repeatability, the degree to which further measurements or calculations show the same or similar results.[1] Although the two words can be synonymous in colloquial use, they are deliberately contrasted in the context of scientific method. 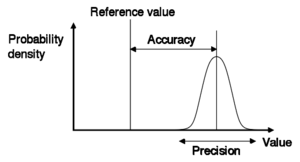 Accuracy indicates proximity to the true value, precision to the repeatability or reproducibility of the measurement

The results of calculations or a measurement can be accurate but not precise, precise but not accurate, neither, or both. For example, if an experiment contains a systematic error, then increasing the sample size will generally produce more precise results, but they will not necessarily be more accurate. A measurement system or computational method is called valid if it is both accurate and precise. The related terms are bias (non-random or directed effects caused by a factor or factors unrelated by the independent variable) and error (random variability), respectively.

Accuracy versus precision; the target analogy

Accuracy is the degree of veracity while precision is the degree of reproducibility.[citation needed] The analogy used here to explain the difference between accuracy and precision is the target comparison. In this analogy, repeated measurements are compared to arrows that are shot at a target. Accuracy describes the closeness of arrows to the bullseye at the target center. Arrows that strike closer to the bullseye are considered more accurate. The closer a system's measurements to the accepted value, the more accurate the system is considered to be.

To continue the analogy, if a large number of arrows are shot, precision would be the size of the arrow cluster. (When only one arrow is shot, precision is the size of the cluster one would expect if this were repeated many times under the same conditions.) When all arrows are grouped tightly together, the cluster is considered precise since they all struck close to the same spot, if not necessarily near the bullseye. The measurements are precise, though not necessarily accurate.

However, it is not possible to reliably achieve accuracy in individual measurements without precision—if the arrows are not grouped close to one another, they cannot all be close to the bullseye. (Their average position might be an accurate estimation of the bullseye, but the individual arrows are inaccurate.) See also circular error probable for application of precision to the science of ballistics.

Ideally a measurement device is both accurate and precise, with measurements all close to and tightly clustered around the known value. The accuracy and precision of a measurement process is usually established by repeatedly measuring some traceable reference standard. Such standards are defined in the International System of Units and maintained by national standards organizations such as the National Institute of Standards and Technology.

With regard to accuracy we can distinguish:

A reading of 8,000 m, with trailing zeroes and no decimal point, is ambiguous; the trailing zeroes may or may not be intended as significant figures. To avoid this ambiguity, the number could be represented in scientific notation: 8.0 × 103 m indicates that the first zero is significant (hence a margin of 50 m) while 8.000 × 103 m indicates that all three zeroes are significant, giving a margin of 0.5 m. Similarly, it is possible to use a multiple of the basic measurement unit: 8.0 km is equivalent to 8.0 × 103 m. In fact, it indicates a margin of 0.05 km (50 m). However, reliance on this convention can lead to false precision errors when accepting data from sources that do not obey it.

Looking at this in another way, a value of 8 would mean that the measurement has been made with a precision of 1 (the measuring instrument was able to measure only down to 1s place) whereas a value of 8.0 (though mathematically equal to 8) would mean that the value at the first decimal place was measured and was found to be zero. (The measuring instrument was able to measure the first decimal place.) The second value is more precise. Neither of the measured values may be accurate (the actual value could be 9.5 but measured inaccurately as 8 in both instances). Thus, accuracy can be said to be the 'correctness' of a measurement, while precision could be identified as the ability to resolve smaller differences.

Precision is sometimes stratified into:

Accuracy and precision in binary classification

Accuracy is also used as a statistical measure of how well a binary classification test correctly identifies or excludes a condition.

That is, the accuracy is the proportion of true results (both true positives and true negatives) in the population. It is a parameter of the test.

An accuracy of 100% means that the measured values are exactly the same as the given values.

Accuracy may be determined from Sensitivity and Specificity, provided Prevalence is known, using the equation:

Accuracy and precision in psychometrics and psychophysics

In psychometrics and psychophysics, the term accuracy is interchangeably used with validity and constant error. Precision is a synonym for reliability and variable error. The validity of a measurement instrument or psychological test is established through experiment or correlation with behavior. Reliability is established with a variety of statistical techniques, classically through an internal consistency test like Cronbach's alpha to ensure sets of related questions have related responses, and then comparison of those related question between reference and target population.[citation needed]

Accuracy and precision in information systems

The concepts of accuracy and precision have also been studied in the context of data bases, information systems and their sociotechnical context. The necessary extension of these two concepts on the basis of theory of science suggests that they (as well as data quality and information quality) should be centered on accuracy defined as the closeness to the true value seen as the degree of agreement of readings or of calculated values of one same conceived entity, measured or calculated by different methods, in the context of maximum possible disagreement.[2]