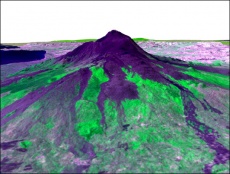 ASTER (Advanced Spaceborne Thermal Emission and Reflection Radiometer) is one of five remote sensory devices on board the Terra satellite launched into Earth orbit by NASA in 1999. The instrument has been collecting surficial data since February 2000.

ASTER provides high-resolution images of the Earth in 15 different bands of the m, ranging from visible to thermal infrared light. The resolution of images ranges between 15 to 90 meters. ASTER data are used to create detailed maps of surface temperature of land, emissivity, reflectance, and elevation. 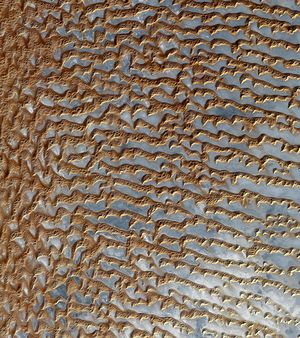 On 29 June 2009, the Global Digital Elevation Model (GDEM) was released to the public.[1][2] A joint operation between NASA and Japan's Ministry of Economy, Trade and Industry (METI), the Global Digital Elevation Model is the most complete mapping of the earth ever made, covering 99% of its surface.[3][4] The previous most comprehensive map, NASA's Shuttle Radar Topography Mission (SRTM), covered approximately 80% of the Earth's surface, [5] with a global resolution of 90 meters,[6] and a resolution of 30 meters over the USA. The GDEM covers the planet from 83 degrees North to 83 degrees South (surpassing SRTM's coverage of 56 °S to 60 °N), becoming the first earth mapping system that provides comprehensive coverage of the polar regions.[5] It was created by compiling 1.3 million VNIR images taken by ASTER using single-pass[7] stereoscopic correlation techniques,[1] with terrain elevation measurements taken globally at 30 meter (98 foot) intervals.[3]

Despite the high nominal resolution, however, some reviewers have commented that the true resolution is considerably lower, and not as good as that of SRTM data, and serious artifacts are present.[8] Some of these limitations have been confirmed by METI and NASA, who point out that the current version of the GDEM product is "research grade". [9]