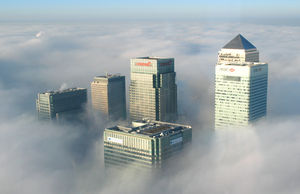 London Docklands in the fog from an AS355

Aerial photography is the taking of photographs of the ground from an elevated position. The term usually refers to images in which the camera is not supported by a ground-based structure. Cameras may be hand held or mounted, and photographs may be taken by a photographer, triggered remotely or triggered automatically. Platforms for aerial photography include fixed-wing aircraft, helicopters, balloons, blimps and dirigibles, rockets, kites, poles and parachutes.

Aerial photography was first practiced by the French photographer and balloonist Gaspard-Félix Tournachon, known as "Nadar", in 1858 over Paris, France. [1]

The first use of a motion picture camera mounted to a heavier-than-air aircraft took place on April 24, 1909 over Rome in the 3:28 silent film short, Wilbur Wright und seine Flugmaschine.

The use of aerial photography for military purposes was expanded during World War I by many others aviators such as Fred Zinn. One of the first notable battles was that of Neuve Chapelle.

With the advent of inexpensive digital cameras, many people now take candid photographs from commercial aircraft and increasingly from general aviation aircraft on private pleasure flights. 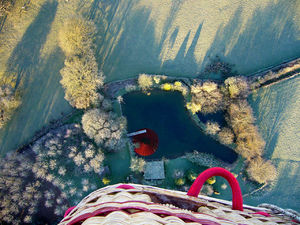 Reflection of a hot air balloon, partially obscured by a pier, an example of low-altitude aerial photography

Advances in radio controlled models has made it possible for model aircraft to conduct low-altitude aerial photography. This has benefited real-estate advertising, where commercial and residential properties are the photographic subject. Full-size, manned aircraft are prohibited from low flights above populated locations.[3] Small scale model aircraft offer increased photographic access to these previously restricted areas. Miniature vehicles do not replace full size aircraft, as full size aircraft are capable of longer flight times, higher altitudes, and greater equipment payloads. They are, however, useful in any situation in which a full-scale aircraft would be dangerous to operate. Examples would include the inspection of transformers atop power transmission lines and slow, low-level flight over agricultural fields, both of which can be accomplished by a large-scale radio controlled helicopter. Professional-grade, gyroscopically stabilized camera platforms are available for use under such a model; a large model helicopter with a 26cc gasoline engine can hoist a payload of approximately seven kilograms (15 lbs).

Because anything capable of being viewed from a public space is considered outside the realm of privacy in the United States, aerial photography may legally document features and occurrences on private property.[4]

As opposed to a bird's-eye view, photographs may be directed vertically. These are often used to create orthophotos – photographs which have been "corrected" so as to be usable as a map. In other words, an orthophoto is a simulation of a photograph taken from an infinite distance, looking straight down. Perspective must obviously be removed, but variations in terrain should also be corrected for. Multiple geometric transformations are applied to the image, depending on the perspective and terrain corrections required on a particular part of the image.

Orthophotos are commonly used in geographic information systems, such as are used by mapping agencies (e.g. Ordnance Survey) to create maps. Once the images have been aligned, or 'registered', with known real-world coordinates, they can be widely deployed.

Large sets of orthophotos, typically derived from multiple sources and divided into "tiles" (each typically 256 x 256 pixels in size), are widely used in online map systems such as Google Maps, which combines orthophotos with satellite imagery for the user in a map type referred to as "Satellite". OpenStreetMap offers the use of similar orthophotos for deriving new map data. Google Earth overlays orthophotos or satellite imagery onto a digital elevation model to simulate 3D landscapes.