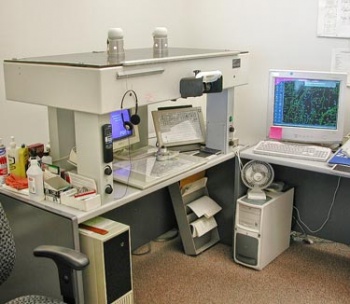 With the introduction of computers, the analytical stereoplotter became a popular machine of choice photogrammetry in the late 1960’s to 1970’s. A stereoplotter is an instrument that uses stereo photographs to determine elevations for the purpose of creating contours on topographic maps. Computers bought the capability to execute more precise calculations that ensure additional accurate output instead of approximations. This innovation also allowed a shift to a digital format rather than paper. Analytical stereoplotters edged out their analog predecessors and became the primary method of acquiring elevation data from stereo photographs.

Analytical stereoplotters use a math projection based on the co-linearity (two vectors pointing in the same direction) equation model. The mechanical element of the device is a very accurate computer-controlled instrument that can view two photographs at the same time. The measurement system can be made to create a very precise and accurate measurement for images because the photo stages only move via the x and y coordinates that are programmed into the system. In comparison, to the analytical stereoplotter, the Kelsh stereoplotter was built with a fixed focal distance and focal length of lens for projection. The ratio for scale was also fixed. On the other hand, the analytical stereoplotter has no substantial limitations on focal length or scale.

The analytical stereoplotters viewing system has an optical train system, which usually includes the ability to change the focal length of a camera by adjusting the lens. Style, size and color of the measuring mark can be adjusted in viewing system as well. There is also an illumination adjustment to each eye.

The analytical stereoplotter measuring system is made up of an input device for the operator to move the elevation point in three dimensions. The input device is programmed, and the digital measure of the elevation point deviation is sent to the computer. With this information, the program then is able to set and locate points for both the interior and exterior of the elevation and record measurements. The transfer of information is immediate and thus the person operating the machine is able to make any necessary adjustments to the coordinates.

Elevations are measured in three steps, that include first measuring the interior orientation, then the relative orientation, and finally the absolute orientation. Interior orientation photographs are placed in relation to the center of the stereoplotter by aligning the fixed standard of reference points for measurement to corresponding points on the photograph. The focal length of the camera is also set. With relative orientation the angle of orientation of the camera relative to the place where the photos were the stereo-photo is taken programmed in the stereoplotter. This allows the effects of parallax (distortion of the final stereo-photo) to be reduced. In bbsolute orientation, the ground coordinates of a position are used to scale the model. You can use this to get the x, y, or z coordinates of any position on the stereo photographs. This information can be used for the construction of contour lines for topographic maps.