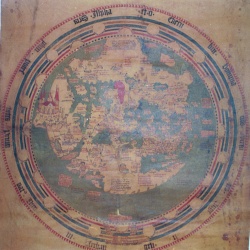 Map of Andreas Walsperger, around 1448

Andreas Walsperger (born ca. 1415 in Radkersburg; time of death unknown) was a German cartographer of the 15th century. The son of a carpenter, he became a monk at St. Peter's in Salzburg in 1434. He left the monastery in 1442. Little is known about him except that in 1448/9 [1] he created his map in Konstanz.

The map of Andreas Walsperger is a Christian Mappa Mundi typical of the medieval style of cartography. It and the "Mappa mundi Ciziensis" from Zeitz are the only remaining representatives of the genre in Germany.

The Fugger family possibly owned the map in the 16th century. In 1622, Maximilian I, Elector of Bavaria, gave it to Pope Gregory XV. The map is now in the Vatican Library Palatina (Lat. 1362 B).

This German engineer, inventor or industrial designer biographical article is a stub. You can help wiki.gis.com by expanding it.
Retrieved from "http://wiki.gis.com/wiki/index.php?title=Andreas_Walsperger&oldid=732806"
Categories: