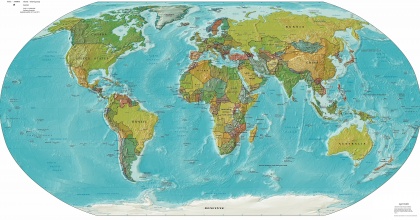 A political and physical map of the world from 2005

An atlas is a collection of maps, typically of Earth or a region of Earth, but there are atlases of the other planets (and their satellites) in the solar system. Atlases have traditionally been bound into book form, but today many atlases are in multimedia formats. In addition to presenting geographic features and political boundaries, many atlases often feature geopolitical, social, religious and economic statistics. 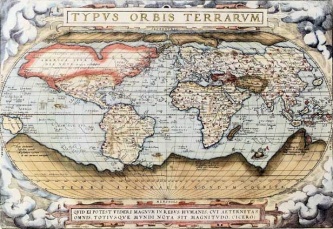 The earliest atlases were not called by that name at the time of their publication, as it was introduced in 1595 by Gerardus Mercator.

The first book that in hindsight could be called an atlas that was constructed from the calculations of Claudius Ptolemy, a geographer working in Alexandria circa A.D. 150. The first edition was published in Bologna in 1477 and was illustrated with a set of 27 maps, though scholars say that it is not known whether the printed maps were engraved versions of original maps made by Ptolemy, or whether they were constructed by medieval Greek scholars from Ptolemy's text.

From about 1544, many maps were produced, especially in the important trading centers of Rome and Venice. Each publisher worked together, producing maps based upon their own needs and interests. The maps often varied dramatically in size. Over time, it became common to bind the maps together into composite works. Although the term atlas was not in use in 1544, these works are now called "IATO" atlases - (Italian, Assembled to Order) or more frequently "Lafreri atlases" after one of the leading publishers of the period.

Abraham Ortelius is credited with issuing the first modern atlas on May 20, 1570. His Theatrum Orbis Terrarum, contained 53 map-sheets covering the countries of the World. This work was the first book of its kind to reduce the best available maps to a uniform size. It was an immediate critical and commercial achievement.

However, use of the word "atlas" for a bound collection of maps was not to come into use until the 1595 publication of Gerardus Mercator's "Atlas, Sive Cosmographicae Meditationes De Fabrica Mundi ..." (Atlas, or Description of the Universe) (Duisburg, 1585-1595).

The origin of the term atlas is a common source of misconception, perhaps because two different mythical figures named 'Atlas' are associated with mapmaking.

In works of art, this Atlas is represented as carrying the heavens or the Celestial Sphere, on his shoulders. The earliest such depiction is the Farnese Atlas, now housed at the Museo Archeologico Nazionale Napoli in Naples, Italy. This figure is frequently found on the cover or title-pages of atlases. This is particularly true of atlases published by Dutch publishers during the second half of the seventeenth century. The image became associated with Dutch merchants, and a statue of this figure adorns the front of the World Trade Center in Amsterdam.

The first publisher to associate the Titan Atlas with a group of maps was Lafreri, on the title-page to "Tavole Moderne Di Geografia De La Maggior Parte Del Mondo Di Diversi Autori ...". However, he did not use the word "atlas" in the title of his work.

With the coming of the global market, publishers in different countries can reprint maps from plates made elsewhere. This means that the place names on the maps often use the designations or abbreviations of the language of the country in which the feature is located, to serve the widest market. For example, islands near Russia have the abbreviation "O." for "ostrov", not "I." for "island". This practice differs from what is standard for any given language, and it reaches its extremity concerning transliterations from other languages. Particularly, German mapmakers use the transliterations from Cyrillic developed by the Czechs which are hardly used in English-speaking countries.

Natural Resources Canada is a government website, which provides an online atlas to the general public, which they can interact with and gain knowledge from. Similar to the Statistics Canada website, the Natural Resources of Canada site offers a wide range of free downloadable data through the linked site GeoGratis. The Atlas of Canada has been around since 1906 and offers maps on the [environment], [people and society], the economy, history, climate change, freshwater and health, as well as reference, archival and topographic maps. Also available through the Atlas of Canada website is the Learning Resources tab, which provides interactive and non-interactive lesson plans for grades as low as 6 and as high as 12. In cartography many scholars are interested in how information or phenomenon from the real world can be better represented on a map [1]. The key word being re-present, since maps bring to life a situation that has already occurred in the past to the present. The Atlas of Canada complies with cartography in that it is targeted toward educating youths in elementary and high school, which would develop their cognitive representation skills. Although there are some aspects of the website that can be improved upon. These are mostly fine details, but some times the smallest changes make the largest impacts and part of growing and developing a better functioning education tool requires improvements. Pro - Downs and Liben, 1988 [2]write about maps being opaque and it requires skills, which are taught before they can be read and understand properly. They believe that something that does not have prior context has to be learned because without cognitive representations misinterpretations of maps is easily done. The Online Atlas of Canada supports this really well by providing numerous lessons plans under its Learning Resources tab Con - The Atlas of Canada is largely promoted as a learning tool for students to become more knowledgeable in GIS, poor colours used in their thematic maps could be influencing bad practices [3]. Some of the sites thematic maps have unsatisfying colour schemes based on the fact that the colours are too close in richness, making it difficult to decipher one colour from the colour above or below it. One of the ways Harrower and Brewer suggest to combat this issue is to utilize an online tool called the ColourBrewer, which assists map makers in picking the best suitable colours.

Some cartographically or commercially important atlases include the following: