From wiki.gis.com
Jump to: navigation, search
"Nuclear clock" redirects here. For the clock as a measure for risk of catastrophic destruction, see Doomsday Clock.
For a clock updated by radio signals (commonly but inaccurately called an "atomic clock"), see Radio clock. 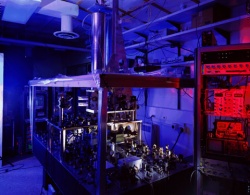 NIST-F1 Caesium fountain atomic clock, serving as the US time and frequency standard, with an uncertainty of 5.10-16 (as of 2005).

An atomic clock is a type of clock that uses an atomic resonance frequency standard as its timekeeping element. They are the most accurate time and frequency standards known, and are used as primary standards for international time distribution services, and to control the frequency of television broadcasts and GPS satellite signals.

Atomic clocks do not use radioactivity, but rather the precise microwave signal that electrons in atoms emit when they change energy levels. Early atomic clocks were masers with attached equipment. Currently the most accurate atomic clocks are based on absorption spectroscopy of cold atoms in atomic fountains such as the NIST-F1.

National standards agencies maintain an accuracy of 10-9 seconds per day (approximately 1 part in 1014), and a precision set by the radio transmitter pumping the maser. The clocks maintain a continuous and stable time scale, International Atomic Time (TAI). For civil time, another time scale is disseminated, Coordinated Universal Time (UTC). UTC is derived from TAI, but synchronized, by using leap seconds, to UT1, which is based on actual rotations of the earth with respect to the mean sun.

The idea of using atomic vibration to measure time was first suggested by Lord Kelvin in 1879. The practical method for doing this became magnetic resonance, developed in the 1930s by Isidor Rabi.[1]. The first atomic clock was an ammonia maser device built in 1949 at the U.S. National Bureau of Standards (NBS, now NIST). It was less accurate than existing quartz clocks, but served to demonstrate the concept.[2] The first accurate atomic clock, a caesium standard based on a certain transition of the caesium-133 atom, was built by Louis Essen in 1955 at the National Physical Laboratory in the UK.[3] Calibration of the cesium standard atomic clock was carried out by the use of the astronomical time scale ephemeris time (ET).[4] This led to the internationally agreed definition of the latest SI second being based on atomic time. Equality of the ET second with the (atomic clock) SI second has been verified to within 1 part in 1010.[5][6] The SI second thus inherits the effect of decisions by the original designers of the ephemeris time scale, determining the length of the ET second. 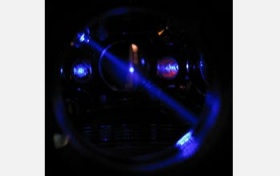 May 2009- JILA's strontium optical atomic clock is now the world's most accurate clock based on neutral atoms. Shining a blue laser onto ultracold strontium atoms in an optical trap tests how efficiently a previous burst of light from a red laser has boosted the atoms to an excited state. Only those atoms that remain in the lower energy state respond to the blue laser, causing the fluorescence seen here. Photo credit: Sebastian Blatt, JILA, University of Colorado[7]

Since the beginning of development in the 1950s, atomic clocks have been made based on the hyperfine (microwave) transitions in hydrogen-1, caesium-133, and rubidium-87. The first commercial atomic clock, was the Atomichron, manufactured by National Company of Malden, MA. More than 50 were sold between 1956 and 1960. This bulky and expensive machine was subsequently replaced by much smaller rack-mountable devices, such as the Hewlett-Packard model 5060 cesium frequency standard, released in 1964.[8].

In the late 1990s four factors contributed to major advances in clocks:[9]

In August 2004, NIST scientists demonstrated a chip-scaled atomic clock.[10] According to the researchers, the clock was believed to be one-hundredth the size of any other. It was also claimed that it requires just 75 mW, making it suitable for battery-driven applications. This device could conceivably become a consumer product.

In March 2008, physicists at NIST demonstrated optical atomic clocks based on individual mercury and aluminium ions. These two clocks are the most accurate that have been constructed to date, with neither clock gaining nor losing at a rate that would exceed a second in over a billion years. [11]

Since 1967, the International System of Units (SI) has defined the second as the duration of 9,192,631,770 cycles of radiation corresponding to the transition between two energy levels of the caesium-133 atom.

This definition makes the caesium oscillator (often called an atomic clock) the primary standard for time and frequency measurements (see caesium standard). Other physical quantities, like the volt and metre, rely on the definition of the second as part of their own definitions.[12]

The core of the atomic clock is a tunable microwave cavity containing the gas. In a hydrogen maser clock the gas emits microwaves (mases) on a hyperfine transition, the field in the cavity oscillates, and the cavity is tuned for maximum microwave amplitude. Alternatively, in a caesium or rubidium clock, the beam or gas absorbs microwaves and the cavity contains an electronic amplifier to make it oscillate. For both types the atoms in the gas are prepared in one electronic state prior to filling them into the cavity. For the second type the number of atoms which change electronic state is detected and the cavity is tuned for a maximum of detected state changes.

This adjustment process is where most of the work and complexity of the clock lies. The adjustment tries to correct for unwanted side-effects, such as frequencies from other electron transitions, temperature changes, and the "spreading" in frequencies caused by ensemble effects. One way of doing this is to sweep the microwave oscillator's frequency across a narrow range to generate a modulated signal at the detector. The detector's signal can then be demodulated to apply feedback to control long-term drift in the radio frequency. In this way, the quantum-mechanical properties of the atomic transition frequency of the caesium can be used to tune the microwave oscillator to the same frequency, except for a small amount of experimental error. When a clock is first turned on, it takes a while for the oscillator to stabilize.

In practice, the feedback and monitoring mechanism is much more complex than described above.

A number of other atomic clock schemes are in use for other purposes. Rubidium standard clocks are prized for their low cost, small size (commercial standards are as small as 400 cm³) and short-term stability. They are used in many commercial, portable and aerospace applications. Hydrogen masers (often manufactured in Russia) have superior short-term stability compared to other standards, but lower long-term accuracy.

Often, one standard is used to fix another. For example, some commercial applications use a Rubidium standard periodically corrected by a GPS receiver. This achieves excellent short-term accuracy, with long-term accuracy equal to (and traceable to) the U.S. national time standards.

The lifetime of a standard is an important practical issue. Modern rubidium standard tubes last more than ten years, and can cost as little as US$50[citation needed]. Caesium reference tubes suitable for national standards currently last about seven years and cost about US$35,000. The long-term stability of hydrogen maser standards decreases because of changes in the cavity's properties over time.

Modern clocks use magneto-optical traps to cool the atoms for improved precision.

Atomic clocks are used to generate standard frequencies. They are installed at sites of time signals, LORAN-C, and Alpha navigation transmitters.[citation needed] They are also installed at some longwave and mediumwave broadcasting stations to deliver a very precise carrier frequency, which can also function as standard frequency.[citation needed]

Atomic clocks are the basis of the GPS navigation system. The GPS master clock is a weighted average of atomic clocks at the ground stations and onboard the GPS satellites, each of which has several atomic clocks.

NIST Most research focuses on the often conflicting goals of making the clocks smaller, cheaper, more accurate, and more reliable.

New technologies, such as femtosecond frequency combs, optical lattices and quantum information, have enabled prototypes of next generation atomic clocks. These clocks are based on optical rather than microwave transitions. A major obstacle to developing an optical clock is the difficulty of directly measuring optical frequencies. This problem has been solved with the development of self-referenced mode-locked lasers, commonly referred to as femtosecond frequency combs. Before the demonstration of the frequency comb in 2000, terahertz techniques were needed to bridge the gap between radio and optical frequencies, and the systems for doing so were cumbersome and complicated. With the refinement of the frequency comb these measurements have become much more accessible and numerous optical clock systems are now being developed around the world.

Like in the radio range absorption spectroscopy is used to stabilize an oscillator — in this case a laser. When the optical frequency is divided down into a countable radio frequency using a femtosecond comb, the bandwidth of the phase noise is also divided by that factor. Although the bandwidth of laser phase noise is generally greater than stable microwave sources, after division it is less.

The two primary systems under consideration for use in optical frequency standards are single ions isolated in an ion trap and neutral atoms trapped in an optical lattice. Single-atom optical clock with high accuracy These two techniques allow the atoms or ions to be highly isolated from external perturbations, thus producing an extremely stable frequency reference.

Optical clocks have already achieved better stability and lower systematic uncertainty than the best microwave clocks.[13] This puts them in a position to replace the current standard for time, the caesium fountain clock.

Modern radio clocks can be referenced to atomic clocks, and provide a way of getting high-quality atomic-derived time over a wide area using inexpensive equipment. However, radio clocks are not appropriate for high-precision scientific work. Many retailers market radio clocks as "atomic clocks"; though the radio signals they receive usually come from true atomic clocks; they are not atomic clocks themselves.

There are a number of longwave radio transmitters around the world, in particular DCF77 (Germany), HBG (Switzerland), JJY (Japan), MSF (United Kingdom), TDF (France) and WWVB (United States). Many other countries can receive these signals (JJY can sometimes be received even in Western Australia and Tasmania at night), but it depends on time of day and atmospheric conditions. There is also a transit delay of approximately 1 ms for every 300 kilometers (186 mi) the receiver is from the transmitter. When operating properly and when correctly synchronized, better brands of radio clocks are normally accurate to the second.

Typical radio "atomic clocks" require placement in a location with a relatively unobstructed atmospheric path to the transmitter, perform synchronization once a day during the night-time, and need fair to good atmospheric conditions to successfully update the time. The device that keeps track of the time between, or without, updates is usually a cheap and relatively inaccurate quartz-crystal clock, since it is thought that an expensive precise time keeper is not necessary with automatic atomic clock updates. The clock may include an indicator to alert users to possible inaccuracy when synchronization has not been successful within the last 24 to 48 hours.