Balance, as a principle of map layout, is when the various parts of a map layout are distributed in a way that their weight is centered around the visual center of the map. If the map is not balanced around the visual center (which is generally slightly above the true center)[1], it will appear less aesthetically pleasing. Balance in cartographic design creates an overall stability, whereas elements in a poorly designed map appear crowded, resulting in confusion.[2] When the desired balance is achieved, the purpose of the map is clear and easily understood.[3][4]

An essential part of correctly balancing a map is knowing how different map features are weighted. A weight is applied based on how quickly an element draws the reader's attention. Heavier elements tend to be dark, brightly colored, and larger. Lighter map features are generally dull colors, are smaller in size, and are lighter. Visual weight also depends on location: Elements at the center of a composition pull less weight than those lying on the outskirts; on the other hand, an object in the upper part of a composition is heavier than one in the lower part. Visual balance also includes two centers: a geometric center and an optical center. The design of the map should be created around the optical center.[5] 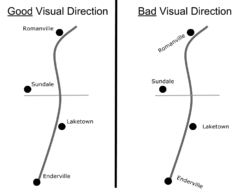 An example of visual direction with labeling is when there are a lot of labels, but the labeling placement has a consistent direction to maintain a common visual direction and balance throughout the map. The image to the right is a good example of consistent label placement. A visual example that depicts what factors are considered with balance in cartography is in Design Balance, Esri.com. In this image Africa is placed in several spots to help the viewer identify visual balance in terms of weight and direction.

Types of Balance in Design 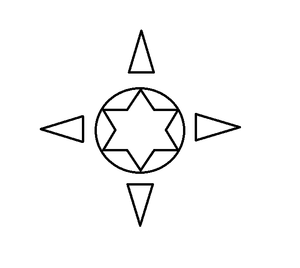 This design shows radial balance. The weight of all elements are equal around the center point. 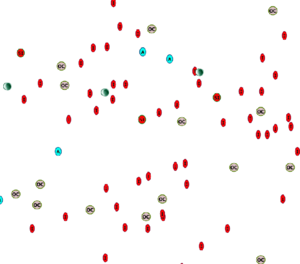 An example of Mosaic Balance. Notice how there is no visual hierarchy to the points.