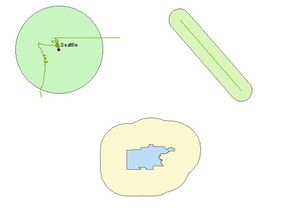 Vector buffers drawn around a point, line, and polygon respectively.

In GIS, a buffer is a zone that is drawn around any point, line, or polygon that encompasses all of the area within a specified distance of the feature. This zone is drawn by a GIS in the form of a new polygon.[1] So-called 'Negative buffers' may also be used for polygons to specify a distance inward from the boundaries of the area feature.[2] Buffers may be used for both raster and vector data model problems.[3]

Buffers are used often because many spatial analyses are concerned with distance constraints, such as emergency planners wanting to know which schools are within 1.5 kilometers of a fault line.[4]

The term buffer may also be used as a verb, as in 'to buffer' a feature.

Raster buffering is the result of classifying cells according to whether the cells lie inside or outside the buffer. Output cells are either assigned an in value or an out value. In value cells are whenever the cell-to-cell distance is less than the specified buffer distance, while out value cells are further than the buffer distance [5]. There are many occasions when buffering is required. One example of using a buffer is showing greenway areas around lakes. Another example of using a buffer is showing areas along highways where the traffic noise is above a certain level [6]. 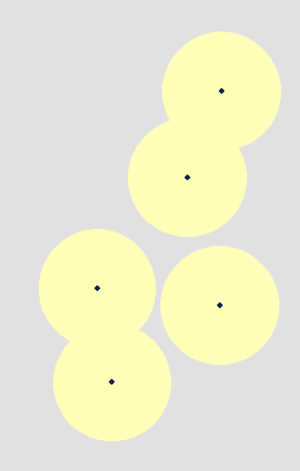 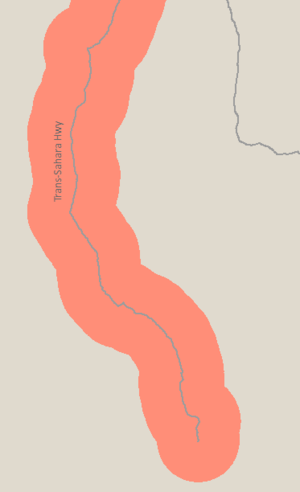 Buffer around a polygon feature.

Variable width buffers allow a varied width between the outside of the buffer and the object being buffered. This type of buffer takes into account variables that would cause the buffered zone around an object to be inconsistent. An example of this type of buffer is mapping the fallout zone around a nuclear reactor, while the fallout zone is being blown by the wind. In the event of a nuclear fallout, the wind could be blowing from east to west. The wind blowing the radiation to the west would cause the area to the west to have a much higher radiation hazard than the area to the east of the reactor. Buffering this area would show a very narrow buffer zone on the east side of the reactor and a very elongated buffer zone to the west.

Buffer is covered in section AM4-1 in the 2006 GIS&T Body of Knowledge.