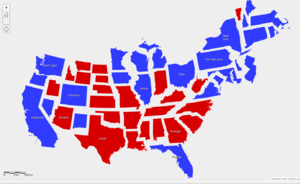 A Cartogram (Origin: late 19th century, from French cartogramme, from carte meaning 'map or card,' and the Greek gramme meaning 'thing written') is a diagram or abstract map in which geographical areas are distorted proportionally to the value of an attribute.[1] That is, size is used as a symbology tool, substituting a non-negative Scale of measurement attribute – such as travel time or gross national product – for actual land area. Therefore, they could be considered a type of Proportional symbol map.

Cartograms require some distortion of real space to correctly represent the variable being mapped, but they vary on their degree in which geographic space is changed. Some appear very similar to a map, but some have very little resemblance to any normal map. Since cartograms do not depict real geographic area, some do not consider them true maps. Cartograms are known by several names, including value-by-area maps, anamorphated images, diagrammatic maps, or simply spatial transformations.[2] There are two main types of cartograms: area and distance cartograms. There are also three subtypes of cartograms: Non-contiguous, contiguous, and dorling cartograms.

Cartograms have been produced by hand as early as the 19th century.[3] One of the first cartographers to generate cartograms with the aid of computer visualization was Waldo Tobler of UC Santa Barbara in the 1960s. Today, on the campus of UCSB, the National Center for Geographic Information and Analysis runs a website called Cartogram Central which provides information on topics such as types of cartograms, software to create cartograms, publications on cartograms, and a number of other resources. 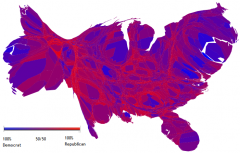 An Area Cartogram of the U.S.

An area cartogram illustrates the relative size of each geographical area by scaling the area of each region in proportion to a selected attribute value. The values are usually quantitative. The shape and relative location of each region are retained to as large an extent as possible, but inevitably a large amount of distortion results. For example, the figure to the right shows an area cartogram of the United States, with each county rescaled in proportion to its population. The various colors refer to the results of the 2004 U.S. presidential election popular vote. It is important to note that there are two forms of area cartograms that have been recognized: contiguous and noncontiguous. In contiguous cartograms, an attempt is made to retain the contiguity of enumeration units; as a result, the shape of units must be greatly distorted. In non-contiguous cartograms, units' shapes are retained, but gaps are introduced between units. [4]

Michael Gastner and Andrew Newman developed a method for creating cartograms that is often referred to as 'population-density equalising'. Their technique is able to a decent job of preserving shape while still accounting for population factors. [5]

Other common synonyms for an area cartogram are a value-by-area map, an isodemographic map, (particularly referring to a population cartogram), an anamorphic map, and a density-equalizing map.[6][7] 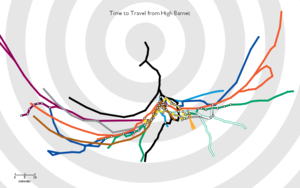 There are three subtypes of cartograms: contiguous, non-contiguous, and dorling. 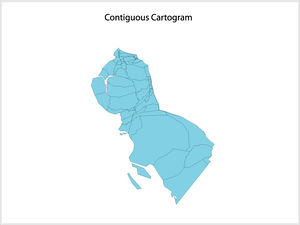 Non-Contiguous cartograms are the simplest and easiest type of cartogram to make. The shape of the enumeration units are retained, but gaps appear between units, disrupting the topology.[10] This is not an issue as these types of cartograms are not limited by the need to maintain correct topology, meaning they do not have to be connected to neighboring objects. [11] Non-contiguous cartograms allow each individual unit to retain its shape while increasing or decreasing in size. Without the preservation of adjacent relationships, there is an issue with identifying the magnitude of an area on the map. [12] One solution is to include a square legend symbol next to the cartogram that represents a small unit of area and can be used to gauge the size of the shapes. There are two types of non-contiguous cartograms: overlapping and non-overlapping. 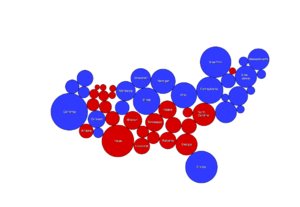 Dorling cartograms is a technique for representing data for areas that ignores original shape entirely in preference for (normally) a geometric shape that represents the unit areas. They replace the enumeration areas by uniformed abstract shapes (usually circles). There is no attempt to maintain shape or topology. It works best when the shapes do not overlap so that each enumeration area can be identified. However, in doing so, the figures are moved from their actual geographic locations. [15] Circles are often used since they are easier to position coherently. A variant of the Dorling cartogram is referred to as the Demers cartogram which uses squares instead of circles and thus reduces the gaps between shapes but the Dorling cartogram attempts to limit the distance of the eventual position of each object from its original position, the Demers sacrifices distance to maintain contiguity.