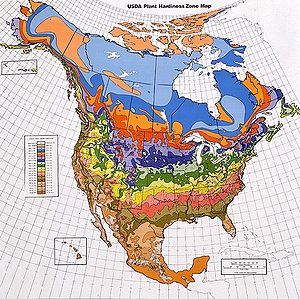 USDA Plant Hardiness Zone Map: Example of a chorochromatic map. Note that the regions change based on variations in plant hardiness zones, not preexisting political boundaries.

Chorochromatic maps are used to depict a wide variety of nominal/discrete fields. Like a quantitative field, a discrete field is a property that varies over space, theoretically having a measurable value at any location. However, the value, in this case, is nominal or categorical, and due to the typical presence of Tobler's First law of geography, there are usually regions of constant value. Because of the constant value in the data, discrete values represent features that have definite boundaries in Chorochromatic maps, and the data shows the measures of a defined area. Discrete Data can only take some values and these ones can be counted but not measured, which make it easy to categorize it into classifications. [2] 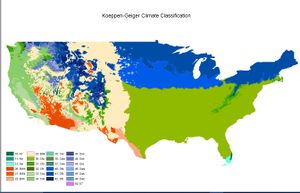 Examples of discrete fields that are commonly depicted using chorochromatic maps include:

Some discrete fields are hierarchical, in which some values are more similar than others (e.g., geologic strata, language), while others consist of entirely independent values. In the hierarchical case, a wise choice of map symbols can help to portray the hierarchy (similar values = similar color).

Chorochromatic maps can easily be misinterpreted. For example, the map reader may assume that the size of the area is proportional to the number of people in the area with that qualitative characteristic. To avoid misleading the map user, the cartographer can add a diagram showing the actual numbers involved, as well as some extra explanations in he legged to help to create a clear understanding of the map. [3].

In simple chorochromatic maps, single features with patchy occurrence are depicted For example: to show the distribution of forest reserves or coal fields in a country.

Usually, the classification resulting in the identification of the unit types shown on a compound chorochromatic map is qualitative, based on apparently discontinuous features. However, in certain cases (for example, soil and vegetation) the aggregate unit area characteristics form parts of a continuum.[4]

Because both are representations of fields, it is possible to construct both chorochromatic and choropleth maps from the same variable. The difference is in the nature of the data. In a choropleth map, the variable is summarized over predetermined districts; for example, census data could be aggregated to determine the predominant language of each country in Europe. Conversely, in a chorochromatic map, the regions are drawn based on detailed locational data. Thus a map of predominant non-English language would have irregular boundaries based on where the language regions are actually located.