From wiki.gis.com
Jump to: navigation, search
This article is about the shape and mathematical concept of circle. For list of topics related to circles, see List of circle topics. For all other uses, see Circle (disambiguation).

A circle is one of the simple shapes of Euclidean geometry. It is the locus of all points in a plane at a constant distance, called the radius, from a fixed point, called the center. Through any three points not on the same line, there passes one and only one circle.

A chord of a circle is a line segment whose both endpoints lie on the circle. A diameter is a chord passing through the center. The length of a diameter is twice the radius. A diameter is the largest chord in a circle.

A circle is a special ellipse in which the two foci are coincident. Circles are conic sections attained when a right circular cone is intersected with a plane perpendicular to the axis of the cone. 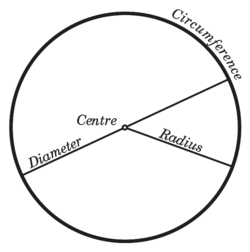 Circle illustration showing a radius, a diameter, the center and the circumference.

In an x-y Cartesian coordinate system, the circle with center (a, b) and radius r is the set of all points (x, y) such that

The equation of the circle follows from the Pythagorean theorem applied to any point on the circle. If the circle is centred at the origin (0, 0), then this formula can be simplified to

When expressed in parametric equations, (x, y) can be written using the trigonometric functions sine and cosine as

where t is a parametric variable, understood as the angle the ray to (x, y) makes with the x-axis. Alternatively, in stereographic coordinates, the circle has a parametrization

It can be proven that a conic section is a circle if and only if the point I(1: i: 0) and J(1: −i: 0) lie on the conic section. These points are called the circular points at infinity.

In polar coordinates the equation of a circle is

In the complex plane, a circle with a center at c and radius (r) has the equation

The tangent line through a point P on a circle is perpendicular to the diameter passing through P. The equation of the tangent line to a circle of radius r centered at the origin at the point (x1, y1) is

More generally, the slope at a point (x, y) on the circle 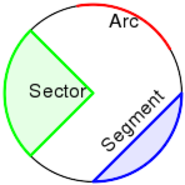 Pi or π is the ratio of a circle's circumference to its diameter.

The numeric value of

In modern English, it is pronounced /ˈpaɪ/ (as in apple pie).

Given that the ratio circumference c to the Area A is

The r and the π can be canceled, leaving

The diameter of a circle is a straight line through the center of the circle touching the circle at both sides.

The diameter of a circle is double its radius. 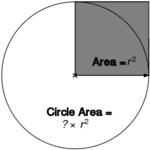 Area of the circle = π × area of the shaded square
Main article: Area of a disk

that is, approximately 79% of the circumscribing square. The circle is the plane curve enclosing the maximum area for a given arclength. This relates the circle to a problem in the calculus of variations.

Another proof of this result which relies only on 2 chord properties given above is as follows. Given a chord of length y and with sagitta of length x, since the sagitta intersects the midpoint of the chord, we know it is part of a diameter of the circle. Since the diameter is twice the radius, the "missing" part of the diameter is (2*r-x) in length. Using the fact that one part of one chord times the other part is equal to the same product taken along a chord intersecting the first chord, we find that (2*r-x)(x)=(y/2)^2. Solving for r, we find: 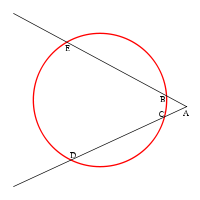 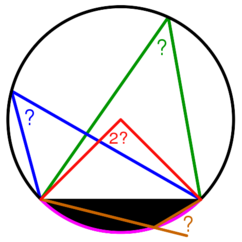 is exactly half of the corresponding central angle

(see Figure). Hence, all inscribed angles that subtend the same arc have the same value (cf. the blue and green angles

in the Figure). Angles inscribed on the arc are supplementary. In particular, every inscribed angle that subtends a diameter is a right angle.

Apollonius' definition of a circle

Apollonius of Perga showed that a circle may also be defined as the set of points in plane having a constant ratio of distances to two fixed foci, A and B.

The proof is as follows. A line segment PC bisects the interior angle APB, since the segments are similar:

, the angle CPD is exactly

, i.e., a right angle. The set of points P that form a right angle with a given line segment CD form a circle, of which CD is the diameter. 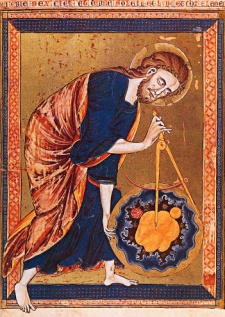 Early science, particularly geometry and astronomy/astrology, was connected to the divine for most medieval scholars. Notice, even, the circular shape of the halo. The compass in this 13th century manuscript is a symbol of God's act of Creation, as many believed that there was something intrinsically "divine" or "perfect" that could be found in circles

A closely related property of circles involves the geometry of the cross-ratio of points in the complex plane. If A, B, and C are as above, then the Apollonius circle for these three points is the collection of points P for which the absolute value of the cross-ratio is equal to one:

Stated another way, P is a point on the Apollonius circle if and only if the cross-ratio [A,B;C,P] is on the unit circle in the complex plane.

If C is the midpoint of the segment AB, then the collection of points P satisfying the Apollonius condition

is not a circle, but rather a line.

Thus, if A, B, and C are given distinct points in the plane, then the locus of points P satisfying (1) is called a generalized circle. It may either be a true circle or a line.