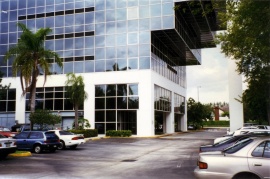 Citrix Systems (NASDAQ: CTXS) is an American multinational corporation with a focus on software and services specialized in virtualization and remote access software for delivering applications over a network and the Internet. Citrix is based in Fort Lauderdale, Florida, in the South Florida metropolitan area, and has subsidiary operations in California and Massachusetts, and additional development centers in Australia, India and the United Kingdom.

Citrix was founded in 1989 by former IBM developer Ed Iacobucci in Richardson, Texas with $3 million in funding. [2] Iacobucci quickly moved the company to Coral Springs, Florida since he lived there when he had worked at IBM. [2]

Citrix was originally named Citrus but changed its name after an existing company claimed trademark rights. The Citrix name is a portmanteau of Citrus and UNIX.

Many of the original founding members had participated in the IBM OS/2 project. Iacobucci's vision was to build OS/2 with multi-user support. IBM was not interested in this idea so Iacobucci left. Iacobucci was offered a job at Microsoft as chief technical officer of its networking group but turned it down to start his own company.[2]

The company's first product was Citrix MULTIUSER, which was based on OS/2. Citrix licensed the OS/2 source code from Microsoft, bypassing IBM. Citrix hoped to capture part of the UNIX market by making it easy to deploy text-based OS/2 applications. The product failed to find a market. This was due in part to Microsoft declaring in 1991 that they were not going to support OS/2 anymore.[2]

Roger Roberts was appointed the CEO of Citrix in 1990. Roberts, a Texan, came from Texas Instruments.

Between 1991 and 1993, Citrix received funding from both Intel and Microsoft as well as venture capitalists. Without the help of this funding, Citrix would not have survived.[2]

In 1993, Citrix introduced WinView, which provided remote access to DOS and Windows 3.1 applications on a multi-user platform. It became Citrix's first successful product. In 1995, WinFrame, based on Windows NT 3.5, was released. WinFrame was sanctioned by Microsoft and embraced by the enterprise businesses. WinFrame pushed Citrix into having widespread adoption.

As part of these successes, the company went public in December 1995.[2]

Citrix obtained a source code license to Microsoft's Windows NT 3.51. In 1995, they shipped a multiuser version of Windows NT with remote access, known as WinFrame. This product gained widespread acceptance, and enabled the company to become more profitable.

During the development of WinFrame for Windows NT 4, Microsoft decided that it did not want to license Windows NT 4 source code to Citrix. Not only that, Microsoft threatened to build its own version.[2][3] Citrix and Microsoft entered negotiations about how best to solve this dilemma.[2][3] After negotiations, Microsoft agreed to license Citrix technology for Windows NT Server 4.0, resulting in Windows Terminal Server Edition[4][5]. Citrix agreed not to ship a competing product but retained the right to sell an extension to Microsoft's products, initially under the name MetaFrame. This relationship continued into the Windows 2000 Server and Windows Server 2003 eras, with Citrix offering Metaframe XP and Presentation Server. On February 11, 2008, Citrix changed the name of its Presentation Server product line to XenApp.

The core technology that Microsoft did not buy was the ICA protocol. Microsoft derived the work for RDP (T.share) protocol from NetMeeting which was originally derived from a deal with PictureTel (now known as Polycom).[6]