Color or colour is the visual perceptual property corresponding in humans to the categories called red, blue, yellow, green and others. Color derives from the spectrum of light (distribution of light power versus wavelength) interacting in the eye with the spectral sensitivities of the light receptors.

Color plays an important role in geospatial science and technology, especially in Cartography and Remote sensing, due to its ability to convey qualitative and quantitative information. Thus, the proper understanding and use of color is crucial to the creation of visual representations that clearly portray aspects of the real world with minimal confusion and misinterpretation.

The Physics of Color

Because color is a cognitive response to the perception of light of varying wavelengths, an understanding of color first requires a knowledge of how light is produced, transmitted, and combined.

Electromagnetic radiation is a form of energy that moves in the form of waves. These waves (such as X-rays, gamma rays and microwaves) make up the Electromagnetic Spectrum.[1] The perception of color is a response to varying wavelengths of electromagnetic radiation (EMR). The eye is only responsive to a very narrow band of EMR, known as the Visible Light band, with wavelengths between 400 nanometers (blue) and 700 nanometers (red). The colors that can be seen are the wavelengths that are reflected by the object, wavelengths/colors that are absorbed by an object are not visible to the human eye. Colored light (that is, transmitting a limited bandwidth) is produced in two ways: 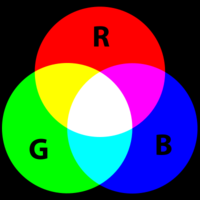 Additive Color: Red, Green, and Blue are the primary colors in the additive color system.

When colored light is produced by emission, multiple narrow-band ("pure" colors) light sources can be combined to produce wider-band colors, which the eye and brain perceive as entirely different hues. The three best additive primary colors are blue, red, and green.[2] When added together by emissive processes, they make the color white. Combining one of the additive primary colors to another in equal value produces a secondary additive color such as cyan, magenta, or yellow; and most other colors can be produced by combining various brightnesses of these three. [3]

James Clerk Maxwell is said to be the father of additive colors. Hermann Helmholtz developed the trichromatic color vision theory which became the basis of the (Red-Green-Blue) color model. The RGB color model uses the three primary colors, in varying degrees of strength, to produce millions of colors using emissive sources, especially on a computer screen. 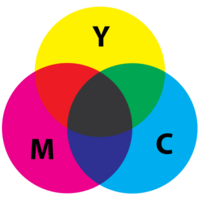 Subtractive color: Yellow, Cyan, and Magenta are mixed to make black due to the absorption of all visible light.

When colored light is produced by filtering, the process is reversed. The ideal primary colors are those that only absorb a narrow band of wavelengths and transmit the rest, so that in combination, more wavelengths are absorbed and less is transmitted. The best three subtractive primary colors are cyan, magenta, and yellow. These colors are said to be subtractive because they absorb certain wavelengths of light while reflecting others, thus subtracting colors from the original light source. For example, an object that appears yellow is absorbing a blue light, and reflecting the red and green wavelengths, which appears yellow. Pigments of cyan, magenta and yellow can then be mixed in different proportions to produce any color. Equal amounts of each of the three primary colors results in black, while equal amounts of two of the three results in the additive primaries, red, green, and blue.[4] The CMYK color model is a specification based on subtractive color, which makes it especially useful for printed media, since ink is a transmissive color process.

When describing a color-producing device such as a monitor or printer, gamut is the total range of colors it can physically produce.

Ideally, additive and subtractive color processes should be perfect inverses of one another. Each set of primaries should be combinable to produce the other set of primaries, and either should be able to produce the same wide array of colors through RGB and CMY formulas that are mathematical inverses. Unfortunately, in practice, this is not possible. Available additive sources, such as LEDs, have become quite good at producing "pure" red, green, or blue, but there is variance from one device to another. This means, for example, that a specified RGB value may look slightly different on one monitor than another, and one monitor may be capable of producing colors that another monitor cannot.

Subtractive color processes, such as printing ink, are dependent on finding natural or synthetic chemicals, which rarely absorb a perfectly targeted range of wavelengths. Because of this, subtractive primary colors do not exactly match the additive secondary colors; while magenta and yellow are fairly close, cyan ink is significantly different than cyan (B+G) light. As a result, colors in the green-blue-purple part of the color often look very different on the printer and the computer screen.

Humans perceive color due to a complex response by the eye and the brain to incoming light. Perception of color can be impacted by many factors. For example, when two colors are side by side they interact with one another and change our perception accordingly, a phenomenon known as simultaneous contrast. As we rarely see colors in isolation, simultaneous contrast affects our sense of the color that we see.

After light is processed by the eye and brain, humans consciously think of color as multidimensional, but along different dimensions than the physical properties above:

To use color in a practical way, such as in maps and remote sensing, one must be able to specify a desired color in a precise, reproducible way. It is generally agreed that the full range of possible colors can best be conceptualized and visualized as a three-dimensional color solid or tristimulus color space, although a variety of different shapes for this solid have been produced. This means that individual colors (i.e., points within the color solid) can be specified by a three-dimensional coordinate. Several standard coordinate systems, or color models have been developed, each having advantages for different applications. Some, such as RGB, are tuned for additive color processes, while others, such as CMYK, are tuned for subtractive color processes. HSV is an example of a color model tuned to the human perception of color as hue, saturation, and value, rather than the physical processes. A number of systems, such as Pantone, are designed to be device-independent, with "recipes" for how to produce the same color using various processes.

The effective use of color is crucial to making a map that is informative and attractive. It can help show increasing or decreasing values, differentiate types of features, establish a visual hierarchy among map layers, prescribe action, among many other uses. It is also crucial in building the aesthetic appeal of a map. However, this can be a challenge for a number of reasons, including the fact that no single standard exists for using colors in maps.

Effective use of hue, saturation, and value are an integral part of creating good visual hierarchy. Bright, bold colors will draw the eye first and must be reserved for map elements of paramount importance. Lighter shades should be used for information that is important to place on the map, but that play a supporting role to the features at the top of the visual hierarchy. For example, a map showing the library branches of a city may have the actual branch locations symbolized as bright red dots, while the city divisions they serve would be shown as areas of pale pastel colors.

Color is a useful Visual variable for representing information. Hue is commonly used to distinguish nominal variables, including feature types and qualitative attributes. While the human eye is capable of perceiving very subtle variations in color, when hues need to be used in a practical way (i.e., distinct colors matched to distinct values), most people can clearly distinguish between 8 and 12 hues.

Using value in map symbols, with light and dark shades, gives a connotation of "less" and "more." It is therefore useful for representing ordinal and quantitative attributes.

Color progressions are good for ordinal (ranked data). Single color progression uses one color that decreases in lightness (value). Bipolar progressions, one hue increasing in lightness, then changing to another hue decreasing in lightness, are good for showing median values, then extremes on both sides. For example, red to blue is good for showing "hot" to "cold". Qualitative colors are good for nominal data, or things that are different with no inherent rank, i.e. vegetation, race, land use, etc. The four color theorem is a mathematical concept stating that only 4 colors are needed for qualitative polygons, though actually rarely used in cartography.[9]

A useful website in choosing colors for maps is http://colorbrewer2.org/. Much attention should be given to ensure that color is not overused or distracts the viewer from other map elements.

Color has a tendency to trigger ideas and emotions in viewers, depending on several factors such as culture, education, and the situational context of the map.

Conventional colors, often ingrained since childhood, are often used to represent the physical terrain (i.e. water is blue, grass is green, etc), and going against these conventions can lead to confusion.[10] However, when making a thematic map, the cartographer has much more freedom to choose the colors to represent thematic elements that have no inherent color, but it is still important to understand how the colors chosen to represent something will affect the viewer. Studies have shown that certain colors may be generally associated with certain emotions. Blues, purples, greens, grays, and similar tones are considered "cool" colors. While red, yellow, orange, and colors with similar tones are considered "warm" colors. The "cool" colors often create feelings of comfort, relaxation, and security. The "warm" colors often elicit feelings of anxiety, speed, and danger. For example, red is often times associated with intensity, rage, rapacity, and anger.[11] It is important to keep in mind the influence of color when designing a map to accomplish a specific purpose.[11]