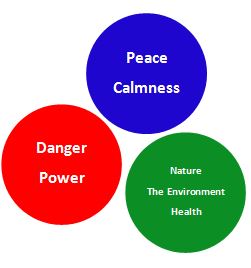 Color connotation is the process by which color can be interpreted with a "natural" or "intuitive" meaning by readers, whether intended or not by the designer. [1]. Connotation is defined as "something suggested by a word or thing."[2]. Some examples of colors connotations in western culture are red conveying danger or power; green symbolizing nature, the environment, or health; blue representing peace and calmness; or dark value representing higher amounts. [3]. In cartography and graphic design, an awareness of the connotations of color is essential in order to convey the intended ideas and feelings and avoid unintended interpretations. It is important to remember that colors convey different messages in different cultures, to ensure offensive material won't be shown use recognized colors for the intended audience.

Studies have shown that certain colors may be generally associated with certain emotions. Blues, purples, greens, grays, and similar tones are considered "cool" colors. Conversely, red, yellow, orange, and colors with similar tones are considered "warm" colors. The "cool" colors often create feelings of comfort, relaxation, and security. The "warm" colors often elicit feelings of anxiety, speed, and danger. For example, red is often times associated with intensity, rage, rapacity, and anger. It is important to keep in mind the influence of color when designing a map to accomplish a specific purpose. [4]

Concepts related to color are a matter of personal cognition, so different readers can have different connotations of color, but there are common patterns. These commonalities may be the result of direct visual experience (e.g., plants are usually green, so green=vegetation), standard convention (e.g., associating colors with political parties, traffic light colors), or thousands of years of culture (e.g., purple=royal). Some of the connotations common to Western culture that are commonly relevant to maps and Cartography include:

Many of these connotations are based on stereotypes that are not universally true.

In this map of soil moisture, the use of shades of green and blue for moist soils and red, yellow and brown for dry soils leverages natural connotations of color

As a cartographer is choosing colors in Cartographic design, sometimes the connotations can be leveraged to strengthen the intuitiveness of the map. For example, it is very common to symbolize water as blue and parks as green. The map's audience, however, needs to be kept in mind since connotations are usually either limited to particular individuals or cultures. Studies have shown only a few color connotations approach universality across all cultures and individuals.[5]

At times the connotations will work against the intentions of the cartographer, who may need to choose certain colors for reasons other than connotation. For example, a blue-red color progression on a Choropleth map may be used to map family size, in which value judgments of "good" and "bad" interpreted from the colors are unwelcome. A common cause of confusion for map readers is the different uses for the same colors on different types of maps. Climate maps will usually use shades of green to symbolize areas with vegetation cover and shades of brown for areas with little vegetation, which follows the connotations of the colors. Hyposometric elevation maps frequently use shades of green to symbolize lowlands and shades of brown for higher elevations. If the map reader is unaware of what kind of map they are looking at, they will assume what the colors mean based on their connotations.[6]