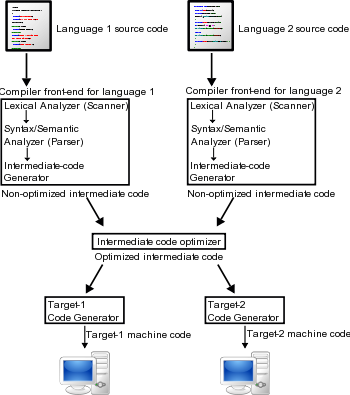 A diagram of the operation of a typical multi-language, multi-target compiler.

A compiler is likely to perform many or all of the following operations: lexical analysis, preprocessing, parsing, semantic analysis, code generation, and code optimization.

Program faults caused by incorrect compiler behavior can be very difficult to track down and work around and compiler implementors invest a lot of time ensuring the correctness of their software.

The term compiler-compiler is sometimes used to refer to a parser generator, a tool often used to help create the lexer and parser.

Software for early computers was primarily written in assembly language for many years. Higher level programming languages were not invented until the benefits of being able to reuse software on different kinds of CPUs started to become significantly greater than the cost of writing a compiler. The very limited memory capacity of early computers also created many technical problems when implementing a compiler.

Towards the end of the 1950s, machine-independent programming languages were first proposed. Subsequently, several experimental compilers were developed. The first compiler was written by Grace Hopper, in 1952, for the A-0 programming language. The FORTRAN team led by John Backus at IBM is generally credited as having introduced the first complete compiler, in 1957. COBOL was an early language to be compiled on multiple architectures, in 1960.[1]

In many application domains the idea of using a higher level language quickly caught on. Because of the expanding functionality supported by newer programming languages and the increasing complexity of computer architectures, compilers have become more and more complex.

Early compilers were written in assembly language. The first self-hosting compiler — capable of compiling its own source code in a high-level language — was created for Lisp by Tim Hart and Mike Levin at MIT in 1962.[2] Since the 1970s it has become common practice to implement a compiler in the language it compiles, although both Pascal and C have been popular choices for implementation language. Building a self-hosting compiler is a bootstrapping problem -- the first such compiler for a language must be compiled either by a compiler written in a different language, or (as in Hart and Levin's Lisp compiler) compiled by running the compiler in an interpreter.

Compiler construction and compiler optimization are taught at universities and schools as part of the computer science curriculum. Such courses are usually supplemented with the implementation of a compiler for an educational programming language. A well-documented example is Niklaus Wirth's PL/0 compiler, which Wirth used to teach compiler construction in the 1970s.[3] In spite of its simplicity, the PL/0 compiler introduced several influential concepts to the field:

One classification of compilers is by the platform on which their generated code executes. This is known as the target platform.

A native or hosted compiler is one whose output is intended to directly run on the same type of computer and operating system that the compiler itself runs on. The output of a cross compiler is designed to run on a different platform. Cross compilers are often used when developing software for embedded systems that are not intended to support a software development environment.

Higher-level programming languages are generally divided for convenience into compiled languages and interpreted languages. However, in practice there is rarely anything about a language that requires it to be exclusively compiled, or exclusively interpreted; although it is possible to design languages that may be inherently interpretive. The categorization usually reflects the most popular or widespread implementations of a language — for instance, BASIC is sometimes called an interpreted language, and C a compiled one, despite the existence of BASIC compilers and C interpreters.

Modern trends toward just-in-time compilation and bytecode interpretation at times blur the traditional categorizations of compilers and interpreters.

Some language specifications spell out that implementations must include a compilation facility; for example, Common Lisp. However, there is nothing inherent in the definition of Common Lisp that stops it from being interpreted. Other languages have features that are very easy to implement in an interpreter, but make writing a compiler much harder; for example, APL, SNOBOL4, and many scripting languages allow programs to construct arbitrary source code at runtime with regular string operations, and then execute that code by passing it to a special evaluation function. To implement these features in a compiled language, programs must usually be shipped with a runtime library that includes a version of the compiler itself.

The output of some compilers may target hardware at a very low level, for example a Field Programmable Gate Array (FPGA) or structured Application-specific integrated circuit (ASIC). Such compilers are said to be hardware compilers or synthesis tools because the programs they compile effectively control the final configuration of the hardware and how it operates; the output of the compilation are not instructions that are executed in sequence - only an interconnection of transistors or lookup tables. For example, XST is the Xilinx Synthesis Tool used for configuring FPGAs. Similar tools are available from Altera, Synplicity, Synopsys and other vendors.

In the early days, the approach taken to compiler design used to be directly affected by the complexity of the processing, the experience of the person(s) designing it, and the resources available.

A compiler for a relatively simple language written by one person might be a single, monolithic piece of software. When the source language is large and complex, and high quality output is required the design may be split into a number of relatively independent phases. Having separate phases means development can be parceled up into small parts and given to different people. It also becomes much easier to replace a single phase by an improved one, or to insert new phases later (eg, additional optimizations).

The division of the compilation processes into phases was championed by the Production Quality Compiler-Compiler Project (PQCC) at Carnegie Mellon University. This project introduced the terms front end, middle end, and back end.

All but the smallest of compilers have more than two phases. However, these phases are usually regarded as being part of the front end or the back end. The point at where these two ends meet is always open to debate. The front end is generally considered to be where syntactic and semantic processing takes place, along with translation to a lower level of representation (than source code).

The middle end is usually designed to perform optimizations on a form other than the source code or machine code. This source code/machine code independence is intended to enable generic optimizations to be shared between versions of the compiler supporting different languages and target processors.

This front-end/middle/back-end approach makes it possible to combine front ends for different languages with back ends for different CPUs. Practical examples of this approach are the GNU Compiler Collection, LLVM, and the Amsterdam Compiler Kit, which have multiple front-ends, shared analysis and multiple back-ends.

Classifying compilers by number of passes has its background in the hardware resource limitations of computers. Compiling involves performing lots of work and early computers did not have enough memory to contain one program that did all of this work. So compilers were split up into smaller programs which each made a pass over the source (or some representation of it) performing some of the required analysis and translations.

In some cases the design of a language feature may require a compiler to perform more than one pass over the source. For instance, consider a declaration appearing on line 20 of the source which affects the translation of a statement appearing on line 10. In this case, the first pass needs to gather information about declarations appearing after statements that they affect, with the actual translation happening during a subsequent pass.

The disadvantage of compiling in a single pass is that it is not possible to perform many of the sophisticated optimizations needed to generate high quality code. It can be difficult to count exactly how many passes an optimizing compiler makes. For instance, different phases of optimization may analyse one expression many times but only analyse another expression once.

While the typical multi-pass compiler outputs machine code from its final pass, there are several other types:

The term back end is sometimes confused with code generator because of the overlapped functionality of generating assembly code. Some literature uses middle end to distinguish the generic analysis and optimization phases in the back end from the machine-dependent code generators.

The main phases of the back end include the following:

Compiler analysis is the prerequisite for any compiler optimization, and they tightly work together. For example, dependence analysis is crucial for loop transformation.

Due to the extra time and space needed for compiler analysis and optimizations, some compilers skip them by default. Users have to use compilation options to explicitly tell the compiler which optimizations should be enabled.

Assembly language is not a high-level language and a program that compiles it is more commonly known as an assembler, with the inverse program known as a disassembler.

A program that translates from a low level language to a higher level one is a decompiler.

A program that translates between high-level languages is usually called a language translator, source to source translator, language converter, or language rewriter. The last term is usually applied to translations that do not involve a change of language.

Every year, the European Joint Conferences on Theory and Practice of Software (ETAPS) sponsors the International Conference on Compiler Construction (CC), with papers from both the academic and industrial sectors.[6]