From wiki.gis.com
Jump to: navigation, search
For other uses, see Conflation (disambiguation). 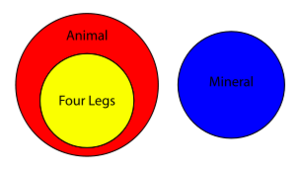 A Euler diagram does not need to show all possible intersections.

Conflation occurs when the identities of two or more individuals, concepts, or places, sharing some characteristics of one another, become confused until there seems to be only a single identity — the differences appear to become lost.[1]

In logic, the practice of treating two distinct concepts as if they were one often produces error or misunderstanding — but not always — as a fusion of distinct subjects tends to obscure analysis of relationships which are emphasized by contrasts.[2]

Horizontal conflation refers to the matching of features and attributes in adjacent GIS sources for the purpose of eliminating positional and attribute discrepancies in the common area of the two sources.

As features are the basic entities in a GIS, the special case of feature conflation has received much attention in the published research.

The data used for conflation are point, line, and area features and their attributes. ... With conflation ... discrepancies can be minimized, thus improving the overall accuracy of the data sources.

The goal of conflation is to combine the best-quality elements of both datasets to create a composite dataset that is better than either of them. The consolidated dataset can then provide more information than can be gathered from any single dataset. [Chen, Knoblock, 2008, p133ff]

Conflation is a combination of two digital maps to produce a third map file which is "better" than each of the component source maps (Lynch and Saalfeld, 1985) .

Automated vector and vector conflation was first proposed by Saalfeld [1], and the initial focus of conflation was using geometrical similarities between spatial attributes (e.g., location, shape, etc.) to eliminate the spatial inconsistency between two overlapping vector maps. In particular, in [1], Saalfeld discussed mathematical theories to support the automatic process. From then, various vector-to-vector conflation techniques have been proposed [2,3] and many GIS systems have been implemented to achieve the alignments of geospatial datasets. More recently, with the proliferation of attributed vector data, attribute information (i. e., non-spatial information) has become another prominent feature used in the conflation systems, such as ESEA MapMerger and the system developed by Cobb et al. [4]. Most of the approaches mentioned above focus on vector-to-vector conflation by adapting different techniques to perform the matching.

(...) The framework of conflation process can be generalized into the following steps:

3) Spatial attribute alignment: Use the accurate control points to align the rest of the geospatial objects (e. g., points or lines) in both datasets by using space partitioning techniques (e. g., triangulation) and geometric interpolation techniques.

During the late 1980s, Saalfeld [1] initialized the study to automate the conflation process. He provided a broad mathematical context for conflation theory. In addition, he proposed an iterative conflation paradigm based on the above-mentioned conflation framework by repeating the matching and alignment, until no further new matches are identified. In particular, he investigated the techniques to automatically construct the influence regions around the control points to reposition other features into alignment by appropriate local interpolation (i. e., to automate the third step in the above-mentioned conflation framework).

The conclusion of Saalfeld’s work is that Delaunay triangulation is an effective strategy to partition the domain space into triangles (influence regions) to define local adjustments (see the example in Fig. 4).

A Delaunay triangulation is a triangulation of the point set with the property that no point falls in the interior of the circumcircle of any triangle (the circle passing through the three triangle vertices). (...) It maximizes the minimum angle of all the angles in the triangulation, thus avoiding elongated, acute-angled triangles. (...) 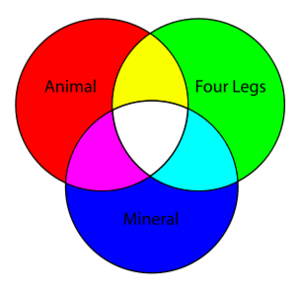 In scientific taxonomies, a conflative term is always a polyseme.[3]