From wiki.gis.com
(Redirected from Contrast)
Jump to: navigation, search

Contrast is the degree of difference between items. As a Cartographic Design technique, contrast refers to making different map symbols visually distinguishable from one another (and their background) in order to facilitate the association of each symbol type with a distinct class of geographic feature. The effective use of contrast produces a map that is clear, organized, and professional. It is also a crucial component of establishing a Visual hierarchy.

To visualize this principle, think about how difficult it is to see at night or in darkly lit places. There is not much light to reflect off of objects making it hard to distinguish where one object ends and another begins. [1] 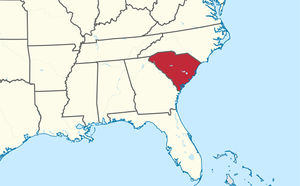 Though a simple example, this map successfully achieves a high degree of contrast with color to emphasize the state of South Carolina 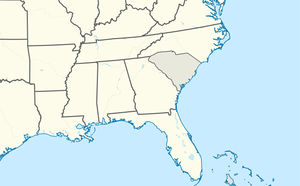 This map shows poor contrast; The color of South Carolina is different than the rest of the map, but the contrast is so subtle that it does not help the feature stand out

Contrast can be created by manipulating any of the Visual variables: light vs. dark, red vs. blue, thick vs. thin, large vs. small, etc. Contrast as a design technique is different than the contrast of an image, which typically refers only to differences in value (light vs. dark). A lack of contrast, such as using black lines as the borders of counties, cities, and vegetation zones, or labeling all features with the same size and style of text, can make it difficult to distinguish the different themes of the map, and decide what is more important. Contrast thus aids in Visual hierarchy as it makes some features look significantly more important than others.