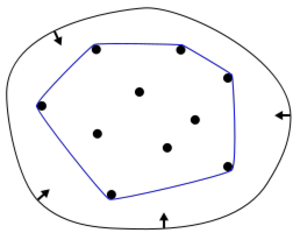 In mathematics, the convex hull or convex envelope for a set of points X in a real vector space V is the minimal convex set containing X.

In computational geometry, it is common to use the term "convex hull" for the boundary of the minimal convex set containing a given non-empty finite set of points in the plane. Unless the points are collinear, the convex hull in this sense is a simple closed polygonal chain.

For planar objects, i.e., lying in the plane, the convex hull may be easily visualized by imagining an elastic band stretched open to encompass the given object; when released, it will assume the shape of the required convex hull.

It may seem natural to generalise this picture to higher dimensions by imagining the objects enveloped in a sort of idealised unpressurised elastic membrane or balloon under tension. However, the equilibrium (minimum-energy) surface in this case may not be the convex hull — parts of the resulting surface may have negative curvature, like a saddle surface (see article about minimal surfaces for examples). For the case of points in 3-dimensional space, if a rigid wire is first placed between each pair of points, then the balloon will spring back under tension to take the form of the convex hull of the points.

Existence of the convex hull

More directly, the convex hull of X can be described constructively as the set of convex combinations of finite subsets of points from X: that is, the set of points of the form

, where n is an arbitrary natural number, the numbers

are non-negative and sum to 1, and the points

are in X. It is simple to check that this set satisfies either of the two definitions above. So the convex hull

In fact, if X is a subset of an N-dimensional vector space, convex combinations of at most N + 1 points are sufficient in the definition above. This is equivalent to saying that the convex hull of X is the union of all simplexes with at most N+1 vertices from X. This is known as Carathéodory's theorem.

In computational geometry, numerous algorithms are proposed for computing the convex hull of a finite set of points, with various computational complexities, including:

Relations to other geometric structures

The problem of finding convex hulls finds its practical applications in pattern recognition, image processing, statistics, GIS and static code analysis by abstract interpretation. It also serves as a tool, a building block for a number of other computational-geometric algorithms such as the rotating calipers method for computing the width and diameter of a point set.