From wiki.gis.com
Jump to: navigation, search
For an elementary introduction to this topic, see [coordinates (mathematics)]. For use in geography, see Geographic coordinate system.

In mathematics and its applications, a coordinate system is a system for assigning an n-tuple of numbers or scalars to each point in an n-dimensional space. This concept is part of the theory of manifolds.[3] "Scalars" in many cases means real numbers, but, depending on context, can mean complex numbers or elements of some other commutative ring. For complicated spaces, it is often not possible to provide one consistent practical coordinate system for the entire space. In this case, a collection of coordinate systems, called graphs, are put together to form an atlas covering the whole space. A simple example (which motivates the terminology) is the surface of the earth. 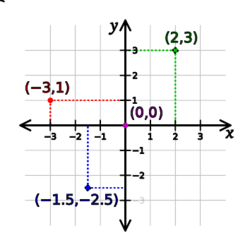 The Cartesian coordinate system in the plane.

These numbers r1, ..., rn are called the coordinates linear polynomials of the point P.

If a subset S of a Euclidean space is mapped continuously onto another topological space, this defines coordinates in the image of S. That can be called a parametrization of the image, since it assigns numbers to points. That correspondence is unique only if the mapping is bijective.

The system of assigning longitude and latitude to geographical locations is a coordinate system. In this case the parametrization fails to be unique at the north and south poles.

Defining a coordinate system based on another one

To read the coordinate system you have to know what side is "n" (the bottom side with numbers) then you go from "n" to whatever your number is.

A coordinate transformation is a conversion from one system to another, to describe the same space.

With every bijection from the space to itself two coordinate transformations can be associated:

Some coordinate systems are the following:

A geographic coordinate system (GCS) defines locations on the earth using a three-dimensional spherical surface [4], it is a reference system that uses latitude and longitude to identify locations on a spheroid or sphere. Oftentimes GCS are referred to solely as datums however, a datum is just one part of a GCS. A GCS includes a datum (based on a spheroid), prime meridian, and an angular unit of measure. [5]. 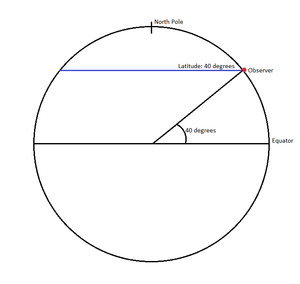 Coordinates can be described using different frames of reference, or datums that are designed to be more accurate for different areas of the earth. The most common datum encountered is the World Geodetic System 1984, and is used in GPS applications.

Geographic coordinate systems vary from projected coordinate systems in that they reference the earth as a 3D object measured in degrees rather than using a 2D projection of the earth's surface to measure it using meters or feet. However, latitude and longitude degrees do not have a standard length. This makes it difficult to measure distance and represent data accurately on a computer screen or flat map.

Rather than using degrees to represent points on a spheroid, some coordinate systems are placed on 2-dimensional projections and function much like the previously mentioned Cartesian System. These coordinate systems often use measurements in feet or meters to express x and y coordinates for specific points. The advantages of these systems are in the easy to express and understand coordinates and simpler calculations of distance and area due to constant lengths and angles across the projection. [8] One of the most common PCS in the United States is the State Plane Coordinate System (SPCS). The SPCS is made of 125 zones which provides for high accuracy within each zone but low accuracy outside the zone. [9]