A geodetic datum (plural datums, not data) is a reference from which spatial measurements are made. In surveying and geodesy, a datum is a set of reference points on the earth's surface against which position measurements are made, and (often) an associated model of the shape of the earth (reference ellipsoid) to define a geographic coordinate system. Horizontal datums are used for describing a point on the earth's surface, in latitude and longitude or another coordinate system. Vertical datums measure elevations or depths. In engineering and drafting, a datum is a reference point, surface, or axis on an object against which measurements are made. 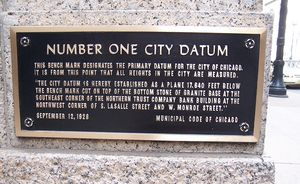 A reference datum (mathematical model) is a known and constant surface which is used to describe the location of unknown points on the earth. Since reference datums can have different radii and different center points, a specific point on the earth can have substantially different coordinates depending on the datum used to make the measurement. There are hundreds of locally-developed reference datums around the world, usually referenced to some convenient local reference point. Contemporary datums, based on increasingly accurate measurements of the shape of the earth, are intended to cover larger areas. The most common reference datums in use in the North America are NAD27, NAD83, and WGS84. 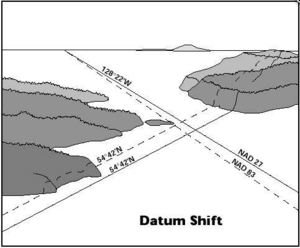 One must pay extra careful attention to the datum they are referencing.[1].

The North American Datum of 1983 (NAD 83) replaced NAD 27 in 1986 as the main horizontal datum for the United States, Canada, Mexico, and Central America. It is based on a network of 250,000 points including 600 satellite Doppler stations.[3] NAD 83 is a great improvement over NAD 27, as it is a more accurate representation of the surface of the earth. NAD 83 is not without error, but it has been found that NAD 27 differs from NAD 83 and true location by several hundred feet.[4]

WGS 84 is the World Geodetic System of 1984. WGS 84 is unique in that it is designed to cover the entire world in its scope. This is a great advantage over NAD 27 and NAD 83, even though it is set up similarly to NAD 83. It is the reference frame used by the U.S. Department of Defense and is defined by the National Geospatial-Intelligence Agency (NGA). [5] WGS 84 is used by the Department of Defense for its mapping needs, including its GPS "broadcast" and "precise" orbits. In January 1987, it became the default standard datum for coordinates stored in recreational and commercial GPS units. Since its inception, WGS 84 has been updated twice, most recently in 2008, to increase its operability with GPS systems. WGS 84 is valid through 2010 and is due for an update in the near future. 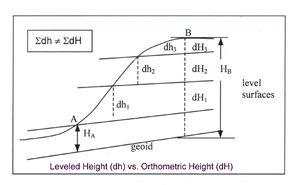 A vertical datum is used for measuring the elevations of points on the earth's surface. They are used as a reference for specifying heights. Vertical datums are either tidal, based on sea levels, or geodetic, based on the same ellipsoid models of the earth used for computing horizontal datums. In the past, datums were measured by survey control points using level bars and optical surface measurement tools. Today, vertical measurements are used via GPS, laser, and satellite [6].

In common usage, elevations are often cited in height above sea level, although what “sea level” actually means is a more complex issue than might at first be thought: the height of the sea surface at any one place and time is a result of numerous effects, including waves, wind and currents, atmospheric pressure, tides, topography, and even differences in the strength of gravity due to the presence of mountains etc.

For the purpose of measuring the height of objects on land, the usual datum used is Mean Sea Level. This is determined by measuring the height of the sea surface over a long period (preferably around 18 years, to account for all the astronomical effects that contribute to tide levels). This allows an average sea level to be determined, with the effects of waves, tides, and short-term changes in wind and currents removed. It will not remove the effects of local gravity strength, and so the height of MSL, relative to a geodetic datum, will vary around the world, and even around one country. For this reason, a country will choose the mean sea level at one specific point to be used as the standard “sea level” for all mapping and surveying in that country. (For example, in Great Britain, the national vertical datum, Ordnance Datum Newlyn, is based on what was mean sea level at Newlyn in Cornwall between 1915 and 1921).

A different principle is used when choosing a datum for nautical charts. For safety reasons, a mariner must be able to know the minimum depth of water that could occur at any point. For this reason, depths and tides on a nautical chart are measured relative to chart datum, which is defined to be a level below which tide rarely falls. Exactly how this is chosen depends on the tidal regime in the area being charted and on the policy of the hydrographic office producing the chart in question; a typical definition is Lowest Astronomical Tide (the lowest tide predictable from based the effects of gravity), or Mean Lower Low Water (the average lowest tide of each day), although MSL is sometimes used in waters with very low tidal ranges.

Conversely, if a ship is to safely pass under a low bridge or overhead power cable, the mariner must know the minimum clearance between the masthead and the obstruction, which will occur at high tide. Consequently, bridge clearances etc are given relative to a datum based on high tide, such as Highest Astronomical Tide or Mean High Water Springs.

While the use of sea-level as a datum is useful for geologically recent topographic features, sea level has not stayed constant throughout geological time, so is less useful when measuring very long-term processes. In some situations sea level does not apply at all — for instance for mapping Mars' surface — forcing the use of a different "zero elevation", such as mean radius.

A geodetic vertical datum takes some specific zero point, and computes elevations based on the geodetic model being used, without further reference to sea levels. Usually, the starting reference point is a tide gauge, so at that point the geodetic and tidal datums might match, but due to sea level variations, the two scales may not match elsewhere. An example of a gravity-based geodetic datum is NAVD88, used in North America, which is referenced to a point in Quebec, Canada. Ellipsoid-based datums such as WGS84, GRS80 or NAD83 use a theoretical surface that may differ significantly from the geoid.

Horizontal datums are a series of data points on the surface of the earth that are used to measure the position of oneself on the Earth’s surface. We use it to measure North and South (latitude), and to measure East and West (longitude). Various datums have been used in the past and, using satellite technology, are being switched to more universally accepted, and accurate datums. Datum conversion is often needed, but can be done by a computer.

An engineering datum used in Geometric Dimensioning and Tolerancing is a feature on an object used to create a reference system for measurement.

Datum conversion is a term used to describe the process of converting the coordinates of a point from one datum system to another. Datum conversion may frequently be accompanied by a change of grid projection. In terms of Esri's ArcMap and ArcGIS Pro, datum conversion has to take place if data is from different coordinate systems. If that is the case, a Geographic Transformation can help to convert the data into a single coordinate system.This is necessary because if datums are not the same, the final product could be anywhere from a few meters to several hundred meters off. [7] In Esri's ArcMap and ArcGIS, datum transformations can't automatically take place because there could be multiple transformations for a place. In order to change to the desired map projection go to the Contents page then click on Properties. From there, click on the Layer Properties then to the Transformation tab. [8]