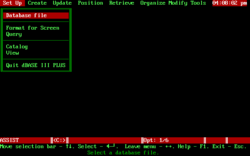 dBase II was the first widely used database management system (DBMS) for microcomputers, published by Ashton-Tate for CP/M, and later on the Apple II, Apple Macintosh, UNIX, VMS[1], and IBM PC under DOS where it and its successors dBase III and dBase IV (there was no dBase I) became one of the best-selling software titles for a number of years.

dBase's underlying file format, the .dbf file, is widely used in many other applications needing a simple format to store structured data.

dBase has evolved into a modern object oriented language that runs on 32 bit Windows. It can be used to build a wide variety of applications including web apps hosted on a Windows server, Windows rich client applications, and middleware applications. dBase can access most modern database engines via ODBC drivers.

dBase features an IDE with a Command Window and Navigator, a just-in-time (JIT) compiler, a preprocessor, a virtual machine interpreter, a linker for creating dBase application executable files (.exe), a freely available runtime engine, and numerous two-way GUI design tools including a Form Designer, Report Designer, Menu Designer, Label Designer, Datamodule Designer, SQL Query Designer, and Table Designer. Two-way Tools refers to the ability to switch back and forth between using a GUI design tool and the Source Code Editor. Other tools include a Source Code Editor, a Project Manager that simplifies building and deploying a dBase application, and an integrated Debugger. dBase features structured exception handling and has many built-in classes that can be subclassed via single inheritance. There are visual classes, data classes, and many other supporting classes. Visual classes include Form, SubForm, Notebook, Container, Entryfield, RadioButton, SpinBox, ComboBox, ListBox, PushButton, Image, Grid, ScrollBar, ActiveX, Report, ReportViewer, Text, TextLabel and many others. Database classes include Session, Database, Query, Rowset, Field, StoredProc and Datamodule classes. Other classes include File, String, Math, Array, Date, Exception, Object and others. dBase objects can be dynamically subclassed by adding new properties to them at runtime.

In addition to the dot-prompt, dBase III, III+ and dBase IV came packaged with an ASSIST (see the photo at the top of page) application to manipulate data and queries, as well as a APPSGEN application which allowed the user to generate applications without resorting to code writing like a 4GL. The dBASE IV APPSGEN tool was based largely on portions of an early CP/M product named Personal Pearl.

Although the language has fallen out of favor as a primary business language, some find dBase an excellent interactive ad-hoc data manipulation tool. Whereas SQL retrieves data sets from a relational database (RDBMS), with dBase one can more easily manipulate, format, analyze and perform calculations on individual records, strings, numbers, and so on in a step-by-step imperative (procedural) way instead of trying to figure out how to use SQL's declarative operations.

Its granularity of operations is generally smaller than SQL, making it easier to split querying and table processing into easy-to-understand and easy-to-test parts. For example, one could insert a BROWSE operation between the filtering and the aggregation step to study the intermediate table or view (applied filter) before the aggregation step is applied.

A major legacy of dBase is its .dbf file format, which has been adopted in a number of other applications. For example, the shapefile format developed by Esri for spatial data in its PC ArcInfo geographic information system, uses .dbf files to store feature attribute data.

dBase's database system was one of the first to provide a header section for describing the structure of the data in the file. This meant that the program no longer required advance knowledge of the data structure, but rather could ask the data file how it was structured. Note that there are several variations on the .dbf file structure, and not all dBase-related products and .dbf file structures are necessarily compatible.

A second filetype is the .dbt file format for memo fields. While character fields are limited to 254 characters each, a memo field is a 10-byte pointer into a .dbt file which can include a much larger text field. dBase was very limited in its ability to process memo fields, but some other xBase languages such as Clipper treat memo fields as strings just like character fields for all purposes except permanent storage.

dBase uses .ndx files for indexes. Some xBase languages include compatibility with .ndx files while others use different file formats such as .ntx used by Clipper and .idx/.cdx used by FoxPro or FlagShip.