From wiki.gis.com
Jump to: navigation, search
For other uses, see Declination (disambiguation). 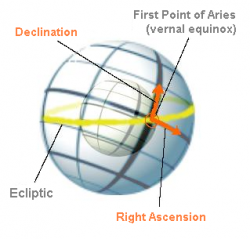 The sign is customarily included even if it is positive. Any unit of angle can be used for declination, but it is often expressed in degrees, minutes, and seconds of arc.

Because a star lies in a nearly constant direction as viewed from earth, its declination is approximately constant from year to year. However, both the right ascension and declination do change gradually due to the effects of precession of the equinoxes, proper motion and annual parallax.

The declinations of all solar system objects change much more quickly than those of stars.

Since the eccentricity of the earth orbit is quite low, it can be approximated to a circle, and δ is approximately given by the following expression:

is Day of the Year, that is the number of days spent since January 1.

An alternative form is given as:[1]

A more precise formula is given by:[2]

is the fractional year in radians.

More accurate daily values from averaging the four years of a leap-year cycle are given in the Table of the Declination of the Sun.

A diagram demonstrating how the Sun's path over the celestial sphere changes with the varying declination during the year, marking the Azimuths in °N where the sun rises and sets at summer and winter solstice at a place of 56°N latitude.