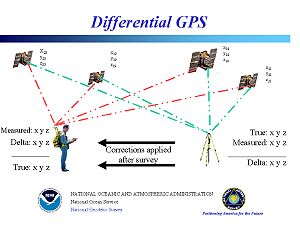 Differential Global Positioning System (DGPS) is an enhancement to the Global Positioning System that uses a network of fixed, ground-based reference stations to broadcast the difference between the positions indicated by the satellite systems and the known fixed positions. These stations broadcast the difference between the measured satellite pseudoranges and actual (internally computed) pseudoranges, and receiver stations may correct their pseudoranges by the same amount. The correction signal is typically broadcast over UHF radio modem.

The DGPS term can refer both to the generalized technique as well as specific implementations using it. It is often used to refer specifically to systems that re-broadcast the corrections from ground-based transmitters of shorter range. For instance, the United States Coast Guard runs one such system in the US and Canada on the longwave radio frequencies between 285 kHz and 325 kHz. These frequencies are commonly used for marine radio, and are broadcast near major waterways and harbors.

Australia runs two DGPS systems. One is mainly for marine navigation, broadcasting its signal on the longwave band;[1], while the other is used for land surveys and land navigation, and has corrections broadcast on the Commercial FM radio band.

Two systems for air navigation and precision landing of aircraft in Australia, called the Ground Based Augmentation System and Ground based Regional Augmentation Systems, will eventually replace the Instrument Landing System. Both these systems utilise DGPS techniques and broadcast corrections via the aviation VHF band.

When GPS was first being put into service, the military was concerned about the possibility of enemy forces using the globally-available GPS signals to guide their own weapon systems. To avoid this, the main "coarse acquisition" signal (C/A) transmitted on the L1 frequency (1575.42MHz) was deliberately degraded by offsetting its clock signal by a random amount, equivalent to about 100 meters of distance. This technique, known as "Selective Availability", or SA for short, seriously degraded the usefulness of the GPS signal for non-military users.[2] More accurate guidance was possible for users of dual frequency GPS receivers that also received the L2 frequency (1227.6MHz), but the L2 transmission, intended for military use, was encrypted and was only available to authorised users with the encryption keys.

This presented a problem for civilian users who relied upon ground-based radio navigation systems such as LORAN, VOR and NDB systems costing millions of dollars each year to maintain. The advent of a global navigation satellite system (GNSS) could provide greatly improved accuracy and performance at a fraction of the cost. The accuracy inherent in the S/A signal was however too poor to make this realistic. The military received multiple requests from the Federal Aviation Administration (FAA), United States Coast Guard (USCG) and United States Department of Transportation (DOT) to set S/A aside to enable civilian use of GNSS, but remained steadfast in its objection on grounds of security.

Through the early to mid 1980s, a number of agencies developed a solution to the SA "problem". Since the SA signal was changed slowly, the effect of its offset on positioning was relatively fixed – that is, if the offset was "100 meters to the east", that offset would be true over a relatively wide area. This suggested that broadcasting this offset to local GPS receivers could eliminate the effects of SA, resulting in measurements closer to GPS's theoretical performance, around 15 meters. Additionally, another major source of errors in a GPS fix is due to transmission delays in the ionosphere, which could also be measured and corrected for in the broadcast. This offered an improvement to about 5 meters accuracy, more than enough for most civilian needs.[1]

The US Coast Guard was one of the more aggressive proponents of the DGPS system, experimenting with the system on an ever-wider basis through the late 1980s and early 1990s. These signals are broadcast on marine longwave frequencies, which could be received on existing radiotelephones and fed into suitably equipped GPS receivers. Almost all major GPS vendors offered units with DGPS inputs, not only for the USCG signals, but also aviation units on either VHF or commercial AM radio bands.

They started sending out "production quality" DGPS signals on a limited basis in 1996, and rapidly expanded the network to cover most US ports of call, as well as the Saint Lawrence Seaway in partnership with the Canadian Coast Guard. Plans were put into place to expand the system across the US, but this would not be easy. The quality of the DGPS corrections generally fell with distance, and most large transmitters capable of covering large areas tend to cluster near cities. This meant that lower-population areas, notably in the midwest and Alaska, would have little coverage by ground-based GPS.

Instead, the FAA (and others) started studies for broadcasting the signals across the entire hemisphere from communications satellites in geostationary orbit. This has led to the Wide Area Augmentation System (WAAS) and similar systems, although these are generally not referred to as DGPS, or alternately, "wide-area DGPS". WAAS offers accuracy similar to the USCG's ground-based DGPS networks, and there has been some argument that the latter will be turned off as WAAS becomes fully operational.

By the mid-1990s it was clear that the SA system was no longer useful in its intended role. DGPS would render it ineffective over the US, precisely where it was considered most needed. Additionally, experience during the Gulf War demonstrated that the widespread use of civilian receivers by U.S. forces meant that SA was thought to harm the U.S. more than if it were turned off. Stating that there weren't enough military GPS receivers, "Selective Availability was temporarily turned off in 1990 during the Persian Gulf War" so Coalition troops could use civilian GPS receivers.[3]. After many years of pressure, it took an executive order by President Bill Clinton to get SA turned off permanently in 2000.[4]

Nevertheless, by this point DGPS had evolved into a system for providing more accuracy than even a non-SA GPS signal could provide on its own. There are several other sources of error that share the same characteristics as SA in that they are the same over large areas and for "reasonable" amounts of time. These include the ionospheric effects mentioned earlier, as well as errors in the satellite position ephemeris data and clock drift on the satellites. Depending on the amount of data being sent in the DGPS correction signal, correcting for these effects can reduce the error significantly, the best implementations offering accuracies of under 10 cm.

In addition to continued deployments of the USCG and FAA sponsored systems, a number of vendors have created commercial DGPS services, selling their signal (or receivers for it) to users who require better accuracy than the nominal 15 meters GPS offers. Almost all commercial GPS units, even hand-held units, now offer DGPS data inputs, and many also support WAAS directly. To some degree, a form of DGPS is now a natural part of most GPS operations.

A reference station calculates differential corrections for its own location and time. Users may be up to 200 nautical miles (370 km) from the station, however, and some of the compensated errors vary with space: specifically, satellite ephemeris errors and those introduced by ionospheric and tropospheric distortions. For this reason, the accuracy of DGPS decreases with distance from the reference station. The problem can be aggravated if the user and the station lack "inter visibility"—when they are unable to see the same satellites.

The United States Federal Radionavigation Plan and the IALA Recommendation on the Performance and Monitoring of DGNSS Services in the Band 283.5–325 kHz cite the United States Department of Transportation's 1993 estimated error growth of 0.67 m per 100 km from the broadcast site [2] but measurements of accuracy across the Atlantic, in Portugal suggest a degradation of just 0.22 m per 100 km. [5]

DGPS can refer to any type of Ground Based Augmentation System (GBAS). There are many operational systems in use throughout the world, according to the US Coast Guard, 47 countries operate systems similar to the US NDGPS (Nationwide Differential Global Positioning System).

A list can be found here 300KHz DGPS stations

The European DGPS network has been mainly developed by the Finnish and Swedish maritime administrations in order to improve safety in the archipelago between the two countries.

In the UK and Ireland, the system was implemented as a maritime navigational to fill the gap left by the demise of the Decca Navigator System in 2000. With a network of 12 transmitters sited around the coastline and three control stations, it was set up in 1998 by the countries' respective General Lighthouse Authorities (GLA) - Trinity House covering England, Wales and the Channel Islands, the Northern Lighthouse Board covering Scotland and the Isle of Man and the Commissioners of Irish Lights covering the whole of Ireland. Transmitting on the 300kHz band, the system underwent testing and two additional transmitters were added before the system was declared operational in 2002.[6][7]

The United States Department of Transportation, in conjunction with the Federal Highway Administration, the Federal Railroad Administration and the National Geodetic Survey appointed the Coast Guard as the maintaining agency for the U.S. Nationwide DGPS network. The system is an expansion of the previous Maritime Differential GPS (MDGPS) which the Coast Guard began in the late 1980s and completed in March 1999. MDGPS only covered coastal waters, the Great Lakes, and the Mississippi River inland waterways, while NDGPS expands this to include complete coverage of the continental United States.[8] The centralized Command and Control unit is USCG Navigation Center, based in Alexandria, VA. The USCG has carried over its NDGPS duties after the transition from the Department of Transportation to the Department of Homeland Security. There are 82 currently broadcasting NDGPS sites in the US network, with plans for up to 128 total sites to be online within the next 15 years.

The Canadian system is similar to the US system and is primarily for maritime usage covering the Atlantic and Pacific coast as well as the Great Lakes and Saint Lawrence Seaway.

Post-processing is used in Differential GPS to obtain precise positions of unknown points by relating them to known points such as survey markers.

The GPS measurements are usually stored in computer memory in the GPS receivers, and are subsequently transferred to a computer running the GPS post-processing software. The software computes baselines using simultaneous measurement data from two or more GPS receivers.

The baselines represent a three-dimensional line drawn between the two points occupied by each pair of GPS antennas. The post-processed measurements allow more precise positioning, because most GPS errors affect each receiver nearly equally, and therefore can be cancelled out in the calculations.

Differential GPS measurements can also be computed in real-time by some GPS receivers if they receive a correction signal using a separate radio receiver, for example in Real Time Kinematic (RTK) surveying or navigation.

The improvement of GPS positioning doesn't require simultaneous measurements of two or more receivers in any case, but can also be done by special use of a single device. In the 1990s when even handheld receivers were quite expensive, some methods of quasi-differential GPS were developed, using the receiver by quick turns of positions or loops of 3-10 survey points. At the TU Vienna the method was named qGPS and adequate post processing software was developed.