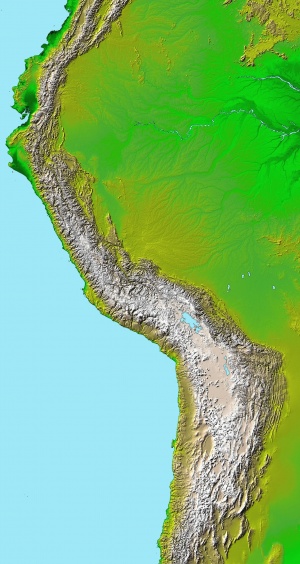 Topography of the Andes from a digital elevation model

A digital elevation model (DEM) is a digital representation of ground surface topography or terrain. It is also widely known as a digital terrain model (DTM). While the term can be used for any representation of terrain as GIS data, it is generally restricted to the use of a raster grid of elevation values. DEMs are commonly built using remote sensing techniques, but they may also be built from land surveying. DEMs are used often in geographic information systems, and are the most common basis for digitally-produced relief maps.

The terrain surface can be described as compromising of two different elements; random and systematic. The random (stochastic) elements are the continuous surfaces with continuously varying relief. It would take an endless number of points to describe exactly the random terrain shapes, but these can be described in practice with a network of points. It is usual to use a network that creates sloping triangles or regular quadrants.

The systematic part of the terrain surface is characterized either by sharp cracks in the terrain, such as the top or bottom of a road cut, or by characteristic points such as spot depression and spot height. The systematic part is best represented by lines and typical single points. Prominent terrain features can be verbally described using many terms, such as smooth slope, cliff, saddle and so on. Geometry, however, has only three terms: point, line, and area. One cannot describe continuously varying terrain using only three discrete variables, so all descriptions are necessarily approximations of reality[1].

Digital elevation models may be prepared in a number of ways, but they are frequently obtained by remote sensing rather than direct survey. One powerful technique for generating digital elevation models is interferometric synthetic aperture radar: two passes of a radar satellite (such as RADARSAT-1), or a single pass if the satellite is equipped with two antennas (like the SRTM instrumentation), suffice to generate a digital elevation map tens of kilometers on a side with a resolution of around ten meters[citation needed]. Alternatively, other kinds of stereoscopic pairs can be employed using the digital image correlation method, where two optical images acquired with different angles taken from the same pass of an airplane or an Earth Observation Satellite (such as the HRS instrument of SPOT5 or the VNIR band of ASTER). [3]

Older methods of generating DEMs often involve interpolating digital contour maps that may have been produced by direct survey of the land surface; this method is still used in mountain areas, where interferometry is not always satisfactory. Note that the contour line data or any other sampled elevation datasets (by GPS or ground survey) are not DEMs but may be considered digital terrain models. A DEM implies that elevation is available continuously at each location in the study area.

The quality of a DEM is a measure of how accurate elevation is at each pixel (absolute accuracy) and how accurately is the morphology presented (relative accuracy). Several factors play an important role for quality of DEM-derived products:

There are many different methods for gathering digital elevation data. Below is a list of a few of those methods: 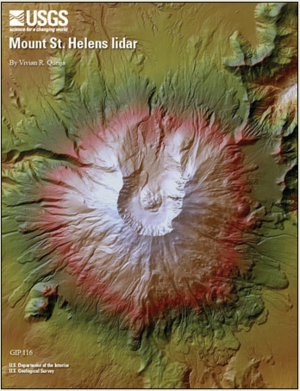 An example of a DEM created by LiDAR data.

Common uses of DEMs include:

Digital elevation models are basic sources of information from which other types of modeling are partially or completely dependent. For this reason, the usefulness and validity of derived models are tightly related to the quality of the original DEM model. Therefore it is important to be aware of the type and magnitude of errors that are inherent when DEMs are constructed. Errors can be classified into two different categories: positional errors and attribute errors. Positional errors imply a deficient geographic localization of their dimensions and trajectory of their contours, therefore affecting the overall situation in the XY plane. Attribute errors assume an imprecise assignation of altitude values in each individual pixel generating defective positions in the Z axis. These two types of errors have been named in a more generic way, cartographic (errors locating basic elements, points, lines and polygons) and thematic (errors in the attributes mapped, such as altitudes, populations or other variables).Both types of errors are introduced when DEMs are created manually or automatically. For this reason, it is necessary to consider certain criteria for their detection and measurement, as well as to assess their influence in the derived models (measure error spreading). Positional errors affect vector models exclusively since they are treated as particular entities. Errors of attributes can be found in both raster and vector models, but are particularly cumbersome in raster models since the altitude values are usually assigned by interpolation methods which are also prompt to errors from multiple factors.

Differences between DEMs and DSMs 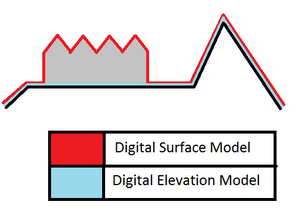 A comparison between DEMs and DSMs.

A digital elevation model - also sometimes called a digital terrain model (DTM)[5] - generally refers to a representation of the Earth's surface (or subset of this), excluding features such as vegetation, buildings, bridges, etc. The DEM often comprises much of the raw dataset, which may have been acquired through techniques such as photogrammetry, LiDAR, IfSAR, land surveying, etc. A digital surface model (DSM) on the other hand includes buildings, vegetation, and roads, as well as natural terrain features.[6] The DEM provides a so-called bare-earth model, devoid of landscape features. While a DSM may be useful for landscape modeling, city modeling and visualization applications, a DEM is often required for flood or drainage modeling, land-use studies, geological applications, and other factors dealing directly with the surface of the Earth.[7]

In 2000 the United States Geological Survey developed a national database for elevation data, called the National Elevation Database or NED which lasted until 2015. The primary initial source of elevation for the NED was 7.5 minute elevation data. Additionally, NED developed more efficient processing methods which can be used to filter production artifacts and convert the datum to NAD83, edge match and fill in small pieces of missing data.[8] After the year 2015 seamless NED became seamless DEM layers through the 3DEP program. Some of the other products from the 3DEP programs are 1 meter DEMs from produced from LIDAR source data and 5 meter DEMs in Alaska.[9]

Freely-obtainable DEM data is available for most of the world at a variety of scales. Because it is easily shareable, useful for a wide variety of purposes, and expensive to create, it is commonly produced by government agencies and distributed to the public.

While data can be obtained from many national, provincial, and local governments, the United States Geological Survey is one of the primary sources for both U.S. and global terrain data.

A free DEM of the whole world called GTOPO30 (30 arc second resolution, approx. 1 km) is available, but its quality is variable and in some areas, it is very poor. A much higher quality DEM from the meter (ASTER) instrument of the Terra satellite is also freely available for 99% of the globe and represents elevation at a 30-meter resolution. A similarly high resolution was previously only available for the United States territory under the Shuttle Radar Topography Mission (SRTM) data, while most of the rest of the planet was only covered in a 3 arc-second resolution (around 90 meters). The limitation with the GTOPO30 and SRTM datasets is that they cover continental landmasses only, and SRTM does not cover the polar regions and has mountain and desert no data (void) areas. SRTM data, being derived from radar, represents the elevation of the first-reflected surface — quite often treetops. So, the data are not necessarily representative of the ground surface, but the top of whatever is first encountered by the radar. Submarine elevation (known as bathymetry) data is generated using ship-mounted depth soundings. The SRTM30Plus dataset (used in NASA World Wind) attempts to combine GTOPO30, SRTM and bathymetric data to produce a truly global elevation model.[10]

Many national mapping agencies produce their own DEMs, often of a higher resolution and quality, but frequently these have to be purchased, and the cost is usually prohibitive to all except public authorities and large corporations.

The US Geological Survey produces the National Elevation Dataset, a seamless DEM for the contiguous United States, Hawaii and Puerto Rico based on 7.5' topographic mapping. As of the beginning of 2006, this replaces the earlier DEM tiled format (one DEM per USGS topographic map).[12][13]