A distortion is the alteration of the original shape (or other characteristic) of an object, image, sound, waveform or other form of information or representation. Distortion is usually unwanted. In some fields, distortion is desirable, such as electric guitar (where distortion is often induced purposely with the amplifier or other electronic effect to achieve a unique sound). The slight distortion of analog tapes and vacuum tubes is considered pleasing in certain situations. The addition of noise or other extraneous signals (hum, interference) is not considered to be distortion,[citation needed] though the effects of distortion are sometimes considered noise.

In Geographical Information Systems, portraying the world on a flat map is necessary to appropriately observe the world in a smaller, yet more convenient way. Unfortunately, anytime that a round object is broken up and flattened, it creates many areas of distortion. Some areas stretch, while others are cut. When the earth is projected onto a flat surface there are at least four different types of distortion: distance, direction, angle, and area. It is impossible to preserve all four means of distortion on one flat projection[1]. 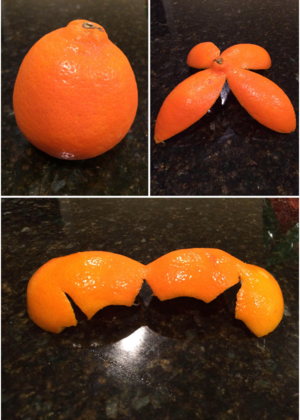 Like the earth, this orange cannot become flattened without distortion. 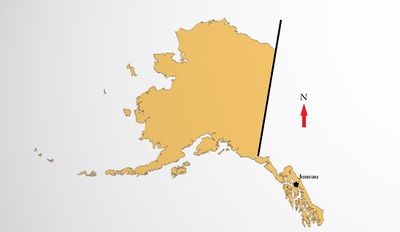 Distortion in direction on a map of Alaska as the city of Juneau is pointing north.

A map that preserves distance (or equidistant) will display the world so that a measured distance on the projection will be the same as on the globe.

A map that preserves direction (also called Azimuthal or True direction) will display the world so that a cardinal direction on the projection will be the exact same as on the globe. These preserved projections are frequently used by pilots. This cardinal direction, however, will be true if calculated from only one starting point to other locations on the map.[2]

A map that preserves shape (also called Conformal) will display the shape of the earth's features as they appear on the earth. A Conformal map projection does this by having the graticule lines intersect in 90 degree angles, so that all displayed geographic phenomena are drawn at the exact angle and shape as they are on the globe. Because of this, the size of features on the map are distorted. Often used by sailors.

A map that preserves the area of a feature (also called equal-area projections) will display the feature in its exact size. An equal-area map projection will distort shape, angle, scale, or any combination of the three.

In cartography, a distortion is the misrepresentation of the area or shape of a feature. There are no map projections that can maintain a perfect scale throughout the entire projection because they are taking a sphereoid and forcing it onto a flat surface. There are four main types of distortion that come from map projections: distance, direction, shape and area. The Mercator projection, for example, distorts Greenland because of its high latitude, in the sense that its shape and size are not the same as those on a globe. Another example is in cylindrical projections. With projections the distortion is minimal at the lines of tangency, or the line along which the projection and the surface of the earth intersect. The further from those lines you get, the more distortion appears in the projection. Different projections are better at minimizing different typed of distortion. For example, conformal conic projections mostly preserve shape, equidistant projections preserve distance and equal area projections preserve area.