From wiki.gis.com
(Redirected from Dot Density)
Jump to: navigation, search 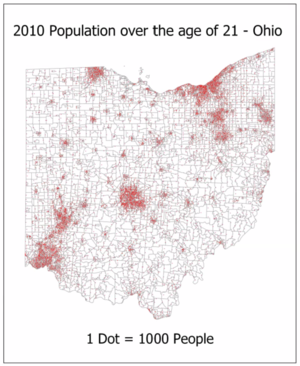 A dot density map is a type of Thematic map that uses large numbers of dots or points to portray the relative geographic distribution of a population of some kind (e.g., people, livestock, businesses). Dot density maps can be a good alternative to choropleth maps because you can show the raw variable without normalizing it because the map viewer still gets an idea of how it is distributed. [1] Each dot may represent either a single individual, or a representative group of individuals, and dots are placed according to the precise or estimated locations of these individuals or groups, usually using GIS data. Thus, areas with more dots indicate higher density/concentration. There are two types of dot maps, produced through very different techniques, but to similar effect: 1) point feature maps, based on point data representing the location of every individual in the population, and 2) choropleth dot maps, using the same kind of polygon/aggregate-attribute data used for choropleth maps, but showing the value of each district using a number of randomly placed dots rather than a solid fill color.

Dot density is an effective method to visualize concentrations of quantitative data. In a dot density map, the dots are all the same size and do not represent actual point locations of data. Due to the random placement of the dots within each area represented on the map, it is important to use the smallest unit area possible to display the data. This allows the placement of the dots to be closer to the actual locations of the features being mapped, portraying a more accurate distribution within each area. For example, if the number of farms in each state of the United States was being represented on a dot density map, a state with few farms, such as Arizona, would have dots spread far apart within its boundaries. If a smaller unit area, such as counties, were used to organize the data, the dots would be located closer to their real-world position.[2] 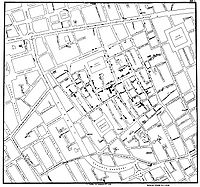 Original map made by John Snow in 1854. Cholera cases are highlighted in black.

During the 1850s, cholera was a large problem throughout England. In 1854, when a large outbreak occurred in London, Dr. John Snow created a dot distribution map that settled a debate between two schools of thought. He found that cholera is not transmitted through the inhalation of infected air but through the ingestion of contaminated water or food.

Snow's map of the 1854 Broad Street cholera outbreak in London was simple and effective in its design. The base map was a simple road network, with few buildings named or depicted. The study area was outlined along the relevant road centerlines. He symbolized all of the water pumps throughout the area. Cholera deaths were depicted along the road network in their correct locations by address and measured by marks stacked next to the road.

The map showed that a high number of deaths were occurring near a water pump on Broad Street at Cambridge Street. Snow petitioned the local authorities to remove the pump's handle, and when the handle was removed, there was a dramatic decrease in cholera cases for the immediate area.

There are two primary types of dot density maps. Both are intended to show relative density, but they are created from very different data sources and use very different techniques.

In a dasymetric dot map, dots are placed in areas of greatest density. This then shows the areas of concentration and sparseness. For example, when looking at a population density map, you are able to see areas of high population and areas of low population due to the placement of the dots. Places on the map that are highly covered with dots show the highest population areas and places that have a low concentration of dots show the lowest population areas. The purpose of a dot map, however, is not to be used as a tool to determine quantities. This means you cannot count every dot and come up with a numeric total. Counting all of the dots on the California map would still leave you unable to come up with the population total.[3] 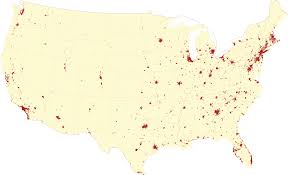 This dot density map uses dots that represent actual feature locations.
The purpose of one-to-one dot maps is to show the frequency at which the selected geographical phenomena occur, by displaying each individual occurrence as one dot. Since one dot represents exactly one occurrence of the geographical phenomena, one-to-one dot density maps are reference maps.[4] One-to-one dot density maps are more common and usually more spatially accurate than one-to-many maps because each dot value in a one-to-one dot map represents exactly one instance of phenomena that are finite and physical. However, if the dots are too frequent or too clustered the data can be confusing and distract from the purpose of the map. In such cases, it may be necessary to agglomerate the values and instead create a one-to-many dot density map. [5] 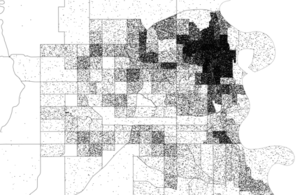 In one-to-many dot density maps, each point represents an assigned value of more than one occurrence of the geographic phenomena depicted on the map. The dot value is the number or value represented by each dot. For example, one dot could represent 1,000 people. One-to-many dot density maps are widely used because phenomena may be difficult to display one at a time. One-to-many dot maps can be useful because dot values may already be in a form that is computed or enumerated at the time the information was retrieved and displayed on the map. It is important that the reader understand the ratio of dots-to-data before drawing any conclusions so that the reader may obtain the correct information from the map. The dot-to-data ratio should be displayed in the legend. [6]

This kind of map technique is similar to a choropleth map for data that are tabulated in census areas. It differs from a choropleth map in that a dot density map uses totals or nonderived quantities as opposed to derived data. In this aspect, dot density can be difficult to portray because density is visually inferred by the dot distribution. There is also an issue when using extreme data sets, whether they are too small or too large of a range. A data set that has a small range will display a uniform distribution on a dot density map while a large data set will have too much variability that is difficult to display. Some examples of appropriate data sets that can be used on dot density maps include agricultural production data, numbers of livestock, and population totals. [5]

There are four main elements that should be considered when creating a choropleth dot density map:

These elements are important to consider because altering any one of them will change the overall appearance and interpretation of the dot density map. Therefore, it is important for the cartographer to spend time assessing which combination of element values most accurately portray the data. 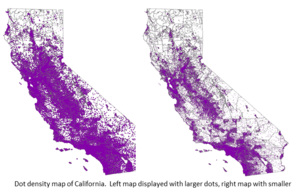 The dot size used in a dot density map can have a large effect on the patterns seen by the map viewer. If the dots are too small, sparse dot patterns will be created on the map. This can raise doubts in the accuracy of the data on the map. If the dots are too large, the opposite problems arise. The dot patterns become very dense and this creates accuracy problems as well. It is best to use an intermediate dot size to represent the data on the map. When considering dot size it is important to use the dot value in coordination with dot size in determining both of these attributes. They work hand in hand in conveying the right message to the viewer. It is important to use simple rounded numbers for the dot value. This helps communicate the purpose of the map.[7]

Pseudo-random dot placement with a maximum overlap constraint for dot pairs appears to better mimic how cartographers have traditionally placed dots. Pseudo-random dot placement can be thought of as similar to the rigid random placement of circles in a square with maximum circle overlap limits from 0% (mutually exclusive dots) to 100% (totally random dots). Thinking of dot placement in this manner allowed a general equation for aggregate dot area to be devised as a linear combination of the mutually exclusive and totally random dot endpoint equations. Aggregate areas predicted by this general equation were found to closely match actual assemblages of pseudo-random dots with differing maximum dot pair overlaps.

A dot map legend showing multiple examples of dot densities to help the map reader more accurately estimate densities. source: Penn State University[8]
A dot density map is simple and can be read without the help of a legend; however, with a legend, the map reader can get an accurate estimation of the area. Most map readers underestimate the number of dots on a dot map, which is why a legend is still placed on these types of maps. A legend is used as a visual anchor to counteract the map reader's tendency to underestimate densities. It is also helpful in understanding the value assigned to each dot. [5] For example, a population map can show a dot for every 10,000 people in each county, with the dots being placed somewhere inside the county polygons. In this way, the map viewer need only look at the differences in the numbers of dots in each county to compare them as opposed to using a legend to help interpret a color gradient. Of course, a legend would still be needed to provide the ratio of dots to people, but it would still wind up being less work for the map viewer to glance at that ratio once as opposed to going back and forth between colors on the map and the legend. [9]