A close-up of the dots produced by an inkjet printer at draft quality. Actual size is approximately 0.25 inches square (0.635 centimetres square). Individual coloured droplets of ink are visible; this sample is about 150 DPI.

Dots per inch (DPI) is a measure of spatial printing or video dot density, in particular the number of individual dots that can be placed within the span of one linear inch (2.54 cm). The DPI value tends to correlate with image resolution, but is related only indirectly.

Because color display units use three coloured sub-pixels (red, green and blue) per pixel, the DPI measurement is frequently misused, especially in the automotive market. An example of misuse would be if an LCD monitor manufacturer claimed that a 320x240 pixel 3" monitor (2.4"x1.8") actually had a resolution of 400 DPI, (three times the pixels per inch). Technically this would be correct (as each sub-pixel could be considered a dot), but compared to the standard accepted practice of using pixels as a means of measuring resolution, it could mislead customers into thinking the relabeled monitor had a greater resolution and therefore better picture quality than identical but normally labeled monitors. Such misuse is commonly found in advertising for in-car LCD displays.

A less misleading term, therefore, is pixels per inch. Video displays are almost universally rated in dot pitch, which refers to the spacing between the sub-pixel red, green and blue dots which make up the pixels themselves. Very often, DPI is confused with image size, leading to expressions such as "1024 x 768 DPI XGA."

Up to a point, printers with higher DPI produce clearer and more detailed output. A printer does not necessarily have a single DPI measurement; it is dependent on print mode, which is usually influenced by driver settings. The range of DPI supported by a printer is most dependent on the print head technology it uses. A dot matrix printer, for example, applies ink via tiny rods striking an ink ribbon, and has a relatively low resolution, typically in the range of 60 to 90 DPI. An inkjet printer sprays ink through tiny nozzles, and is typically capable of 300-600 DPI.[1] A laser printer applies toner through a controlled electrostatic charge, and may be in the range of 600 to 1800 DPI.

The DPI measurement of a printer often needs to be considerably higher than the pixels per inch (PPI) measurement of a video display in order to produce similar-quality output. This is due to the limited range of colours for each dot typically available on a printer. At each dot position, the simplest type of colour printer can print no dot, or a dot consisting of a fixed volume of ink in each of four colour channels (typically CMYK with cyan, magenta, yellow and black ink). Contrast this to a standard sRGB monitor where each pixel produces 256 intensities of light in each of three channels (RGB) to additively create 256³ = 16,777,216 colours. The number of unique colours for a printed CMYK dot from this simplest type of inkjet printer is only 8 since no coloured ink is visible when printed on black and black is used instead of CMY:

While some colour printers can produce variable drop volumes at each dot position, and may use additional ink colour channels, the number of colours is still typically less than on a monitor. Most printers must therefore produce additional colours through a halftone or dithering process. The exception to this rule is a Dye-sublimation printer that utilizes a printing method more akin to Pixels per inch.

The printing process could require a region from four to six dots (measured across each side) in order to faithfully reproduce the colour contained in a single pixel. An image that is 100 pixels wide may need to be 400 to 600 dots in width in the printed output; if a 100×100-pixel image is to be printed inside a one-inch square, the printer must be capable of 400 to 600 dots per inch in order to accurately reproduce the image. 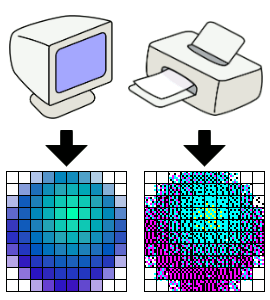 A 10×10-pixel image on a computer display usually requires many more than 10×10 printer dots to accurately reproduce, due to limitations of available ink colours in the printer.

DPI refers to the physical dot density of an image when it is reproduced as a real physical entity, for example printed onto paper, or displayed on a monitor. A digitally stored image has no inherent physical dimensions, measured in inches or centimetres. Some digital file formats record adfhgdfhdh DPI value, or more commonly a PPI (pixels per inch) value, which is to be used when printing the image. This number lets the printer know the intended size of the image, or in the case of scanned images, the size of the original scanned object. For example, a bitmap image may measure 1000×1000 pixels, a resolution of one megapixel. If it is labeled as 250 PPI, that is an instruction to the printer to print it at a size of 4×4 inches. Changing the PPI to 100 in an image editing program would tell the printer to print it at a size of 10×10 inches. However, changing the PPI value would not change the size of the image in pixels which would still be 1000×1000. An image may also be resampled to change the number of pixels and therefore the size or resolution of the image, but this is quite different from simply setting a new PPI for the file.

For vector images, there is no equivalent of resampling an image when it is resized, and there is no PPI in the file because it is resolution independent (prints equally well at all sizes). However there is still a target printing size. Some image formats, such as Photoshop format, can contain both bitmap and vector data in the same file. Adjusting the PPI in a Photoshop file will change the intended printing size of the bitmap portion of the data and also change the intended printing size of the vector data to match. This way the vector and bitmap data maintain a consistent size relationship when the target printing size is changed. Text stored as outline fonts in bitmap image formats is handled in the same way. Other formats, such as PDF, are primarily vector formats which can have bitmaps pasted into them. In these formats the target PPI of the bitmaps is adjusted to match when the target print size of the file is changed. This is the converse of how it works in a primarily bitmap format like Photoshop, but has exactly the same result of maintaining the relationship between the vector and bitmap portions of the data.

Some have also proposed using "dots per centimeter" (dpcm).[2]