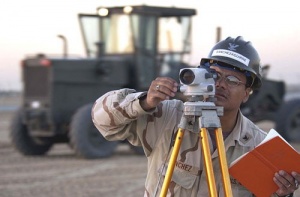 Automatic level in use on a construction site 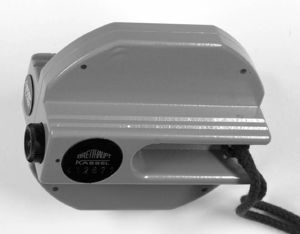 Leveler for use by hand

The level instrument is set up on a tripod and, depending on the type, either roughly or accurately set to a leveled condition using footscrews (levelling screws). The operator looks through the eyepiece of the telescope while an assistant holds a tape measure or graduated staff vertical at the point under measurement. The instrument and staff are used to gather and/or transfer elevations (levels) during site surveys or building construction. Measurement generally starts from a benchmark with known height determined by a previous survey, or an arbitrary point with an assumed height.

A dumpy level is an older-style instrument that requires skilled use to set accurately. The instrument requires to be set level (see spirit level) in each quadrant, to ensure it is accurate through a full 360° traverse. Some dumpy levels will have a bubble level insuring an accurate level.

A variation on the dumpy and one that was often used by surveyors, where greater accuracy and error checking was required, is a tilting level. This instrument allows the telescope to be effectively flipped through 180°, without rotating the head. The telescope is hinged to one side of the instrument's axis; flipping it involves lifting to the other side of the central axis (thereby inverting the telescope). This action effectively cancels out any errors introduced by poor setup procedure or errors in the instrument's adjustment. As an example, the identical effect can be had with a standard builder's level by rotating it through 180° and comparing the difference between spirit level bubble positions.

An automatic level, self-leveling level or builder's auto level, includes an internal compensator mechanism (a swinging prism) that, when set close to level, automatically removes any remaining variation from level. This reduces the need to set the instrument truly level, as with a dumpy or tilting level. Self-leveling instruments are the preferred instrument on building sites, construction and surveying due to ease of use and rapid setup time.

A digital electronic level is also set level on a tripod and reads a bar-coded staff using electronic laser methods. The height of the staff where the level beam crosses the staff is shown on a digital display. This type of level removes interpolation of graduation by a person, thus removing a source of error and increasing accuracy.

The term dumpy level endures despite the evolution in design.