Eduard Imhof (25 January 1895 - 27 April 1986) was a professor of cartography at the Swiss Federal Institute of Technology (ETH Zürich) from 1925 - 1965. He founded the Institute of Cartography at ETH Zürich, and though it started out as a hand-painted sign above his small office, it was the first of its kind in the world[2]. His fame, which extends far beyond the Institute of Technology, stems from his relief shading work on school maps and atlases[1]. One of his relief shadings was of the Canton Aargau, drawn with pencil, ink, and white paint, and is one of Imhof's many masterpieces. The shaded relief is comprised of four parts composited as a whole piece which is the final map[3]. For more than 40 years—from 1922 until 1973—he used the school maps and atlases as a test-bed to illustrate his theories on map art and design[4]. He drew and shaded maps of Switzerland as well as her various cantons and the Austrian province of Vorarlberg. Through his work, Imhof is responsible for innovating three-dimensional map models. Eduard Imhof's most impressive work was of modeling mountains. Three of his primary works are on permanent display at the Swiss Alpine Museum in Bern, in the Naturwissenschaftlichen Sammlungen of the city of Winterthur and in the ETH-Hönggerberg. 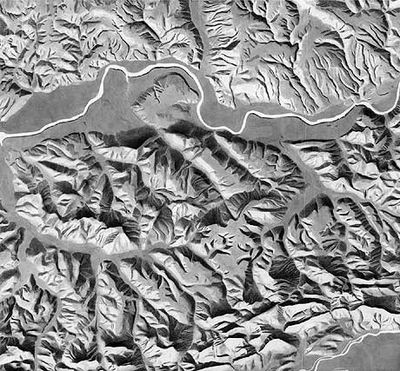 From 1914-1919, Eduard studied at the Swiss Federal Institute of Technology Zurich (ETH). His education was heavily influenced by three main professors: Dr. H.C. Fritz Baeschlin (geodesist), Dr. H.C. Fridolin Baker (cartographer), and Dr. Jakob Früh (geographer)[5]. While a student at ETH, his studies were often interrupted by military duty guarding the Swiss border in Southern Ticino and at St. Gotthard. In 1916, he was promoted as a lieutenant of artillery. Imhof would return to military service in 1939 and serve occasionally until 1945, eventually gaining the rank of major. Upon earning his diploma as a surveyor in 1919, Imhof began working as an assistant faculty member to Dr. Baeschilin at the Institute of Geodesy of the ETH[5].

Most of his work involved terrain analysis of mountainous regions. Because of his employment with the Swiss Federal Institute of Technology in Zurich, he primarily performed geodesy analysis of the Swiss Alps. In addition to his work in Switzerland, Imhof also conducted terrain studies across the globe. He spent several weeks living in a Tibetan monastery in 1930 while he was measuring the height and position of Minya Konka. On this expedition he was accompanied by Paul Nabholz and Arnold Heim.

In 1949, Imhof was awarded an honorary Doctorate of Philosophy from the University of Zurich for his work as a cartographer. Imhof traveled to Ankara to work on surveying Turkey in 1951. While in Turkey, he worked for the Turkish Office for Land Surveying (Harita Genel Müdürlügü). In 1954, Imhof married Viola May. He also made an ascent of Mount Ararat that year. Imhof retired from teaching academically in 1965, but continued to give lectures and accept many awards for his lifetime of achievement until his death in Erlenbach, after a short illness in 1986[6].

Imhof is best known for his development of cartographic relief depiction methods, which allowed him to produce maps with incredible degree of three-dimensional characteristics. He is associated with a method sometimes referred to as the "Swiss manner" or Swiss Style Color Shading Relief, which involves using oblique illumination for the upper left side of the map, with hyposometric tinting to add perspective, as well as consideration and representation of altitude. Imhof further enhanced this method by adding unconventional yet effective elements such as contour lines, land form symbols, and even rock drawings[7]. Besides his work with shaded relief, Imhof made major contributions to cartography as a whole, including thematic mapping and map symbology, among many others. Elements of Imhof's contributions are used in the field of cartography to this day.