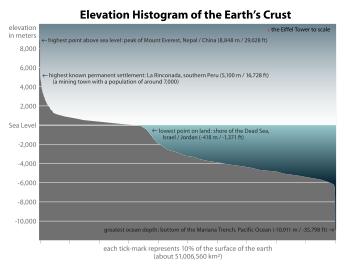 Elevation histogram of the surface of the Earth – approximately 71% of the Earth's surface is covered with water.
For other uses, see Elevation (disambiguation).

The elevation of a geographic location is its height above a fixed reference point, often the mean sea level. Elevation, or geometric height, is mainly used when referring to points on the Earth's surface, while altitude or geopotential height is used for points above the surface, such as an aircraft in flight or a spacecraft in orbit.

Less commonly, elevation is measured using the center of the Earth as the reference point. Due to equatorial bulge, there is debate which of the summits of Mt. Everest or Chimborazo is at the higher elevation, as the Chimborazo summit is further from the Earth's center while the Mt. Everest summit is higher above mean sea level. 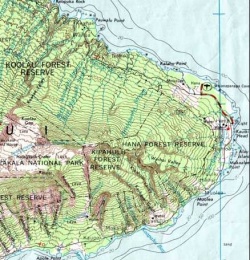 Part of a topographic map of Haleakala (Hawaii), showing elevation.

A topographical map is the main type of map used to depict elevation, often through use of contour lines.

In a Geographic Information System (GIS), digital elevation models (DEM) are commonly used to represent the surface (topography) of a place, through a raster (grid) dataset of elevations. Digital terrain models are another way to represent terrain in GIS.

To determine elevation of a place, it must be surveyed, in reference to a ground control point.

This map is derived from GTOPO30 data that describes the elevation of Earth's terrain at intervals of 30 arcseconds (approximately 1 km). It uses color and shading instead of contour lines to indicate elevation.