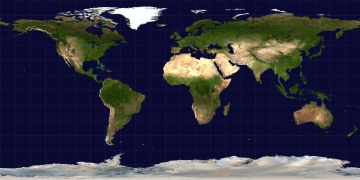 An equirectangular projection of the Earth; the standard parallel is the equator. 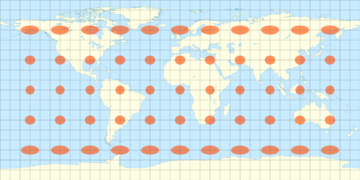 The equirectangular projection with Tissot's Indicatrix of deformation

The equirectangular projection (also called the equidistant cylindrical projection, geographic projection, plate carrée or carte parallelogrammatique projection or CPP) is a very simple map projection attributed to Marinus of Tyre, who Ptolemy claims invented the projection about 100 AD.[1] The projection maps meridians to equally spaced vertical straight lines, and circles of latitude to evenly spread horizontal straight lines. The projection is neither equal area nor conformal. Because of the distortions introduced by this projection, it has little use in navigation or cadastral mapping and finds its main use in thematic mapping. In particular, the plate carrée has become a de-facto standard for computer applications that process global maps, such as Celestia and NASA World Wind, because of the connection between an image pixel and its geographic position.

is the longitude from the central meridian of the projection,

are the standard parallels (north and south of the equator) where the scale of the projection is true.

Note that on the right side of the equation, the coordinates

are linear, not angular, measurements. The point

is at the center of the resulting projection (in particular, this requires the input range to be

). This projection maps longitude and latitude directly into x and y, hence is sometimes called the longitude-latitude projection.

The plate carrée (French, for "flat square"), is the special case where