A Flow map is a type of Thematic map that hybridizes maps and flow charts, showing the movement of objects from one location to another such as the number of people in a migration, the amount of goods being traded, or the number of packets in a network.[1] Flow maps are useful when one needs to show any of the following: a) the presence or absence of a connection between places; b) the route taken from one place to another; c) the (qualitative) kind of movement taking place; d) the direction of movement; or e) the (quantitative) amount of movement taking place. 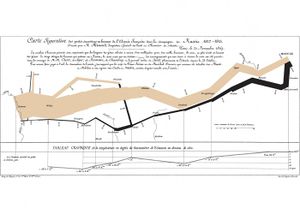 One of the most famous flow maps is Minard's Map of Napoleon's Invasion of Russia. Drawn in 1869 by French engineer Charles Joseph Minard, it shows the route, and size of Napoleon's army as they attempted to invade Moscow before the battle of Waterloo[2]. The line gets thinner as the number of French troops diminishes and eventually retreats to Poland. The chart at the bottom coincides with the black retreat line and graphs the cold winter temperatures the French soldiers endured throughout their homeward journey. This is one of the earliest examples of flow maps, and is described by French scientist E.J. Marey as "seeming to defy the pen of the historian by its brutal eloquence."[3]

In 1987, Waldo Tobler developed a piece of software for displaying migration flows. One of the simpler options in his software was the depiction of one-way migration to or from a particular state. It was possible to show the migration between each state and a selected state by using arrows of different width. [4] Today, most Flow maps are produced using standard GIS or graphics design software.

There are a variety of kinds of flow maps, depending on the kind of information that is being portrayed. The different aspects of movement that may or may not be represented include:

These are not distinct types of maps; a flow map may portray any or all of these aspects simultaneously.

Lines on quantitative flow maps can be scaled so that their widths are proportional to the amount they represent. Flow maps without quantitative data often use lines that are unscaled and are of uniformed thickness. Direction of movement is frequently important, so arrowheads are a likely part of the symbolization as well.[5]

The principles of scale and generalization are of particular importance when creating and reading line flow maps. Flow maps usually require a large amount of generalization due to the fact that they often include many traffic routes which, if not generalized to the proper degree, will likely overcome the map and cause a high degree of clutter. 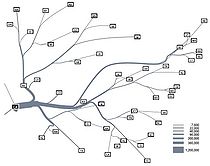 Flow Map of California migration 1995-2000 (U.S. Census). This map shows the distribution of people leaving California for other states.
Flow maps can be used to show movement of: 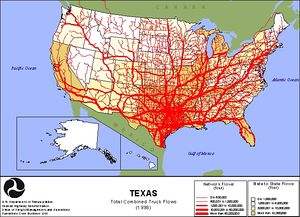 Flow Maps are one of the ten diagrams defined in Thinking Maps.

Other Types of Flow Maps

Beside the flow maps in cartography there are several other kinds of flow maps: