For cyclical processes, such as rotation, oscillations, or waves, frequency is defined as a number of cycles, or periods, per unit time. In physics and engineering disciplines, such as optics, acoustics, and radio, frequency is usually denoted by a Latin letter f or by a Greek letter ν (nu).

In SI units, the unit of frequency is hertz (Hz), named after the German physicist Heinrich Hertz. For example, 1 Hz means that an event repeats once per second, 2 Hz is twice per second, and so on. This unit was originally called a cycle per second (cps), which is still sometimes used. Heart rate and musical tempo are measured in beats per minute (BPM). Frequency of rotation is often expressed as a number of revolutions per minute (rpm). BPM and rpm values must be divided by 60 to obtain the corresponding value in Hz: thus, 60 BPM translates into 1 Hz.

The period is usually denoted as T, and is the reciprocal of the frequency f:

The SI unit for period is the second.

To calculate the frequency of an event, the number of occurrences of the event within a fixed time interval are counted, and then divided by the length of the time interval.

By stroboscope effect, or frequency beats

Frequency has an inverse relationship to the concept of wavelength, simply, frequency is inversely proportional to wavelength λ (lambda). The frequency f is equal to the speed v of the wave divided by the wavelength λ of the wave:

In the special case of electromagnetic waves moving through a vacuum, then v = c , where c is the speed of light in a vacuum, and this expression becomes:

When waves from a monochromatic source travel from one medium to another, their frequency remains exactly the same — only their wavelength and speed change.

Radiant energy is energy which is propagated in the form of electromagnetic waves. Most people think of natural sunlight or electrical light, when considering this form of energy. The type of light which we perceive through our optical sensors (eyes) is classified as white light, and is composed of a range of colors (red, orange, yellow, green, blue, indigo, violet) over a range of wavelengths, or frequencies.

Visible (white) light is only a small fraction of the entire spectrum of electromagnetic radiation. At the short end of that wavelength scale is ultraviolet (UV) light from the sun, which cannot be seen. At the longer end of that spectrum is infrared (IR) light, which is used for night vision and other heat-seeking devices. At even shorter wavelengths than UV are X-rays and Gamma-rays. At longer wavelengths than IR are microwaves,radio waves, electromagnetic waves in megahertz and kHz range, as well as natural waves with frequencies in the millihertz and microhertz range. A 2 millihertz wave has a wavelength approximately equal to the distance from the earth to the sun. A microhertz wave would extend 0.0317 light years. A nanohertz wave would extend 31.6881 light years. 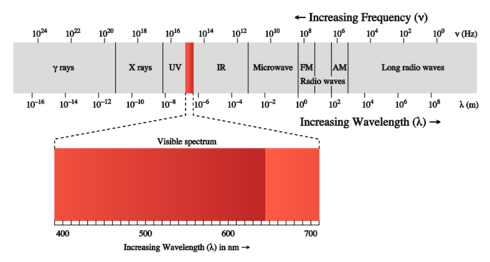 Complete spectrum of electromagnetic radiation with the visible portion highlighted

Electromagnetic radiation is classified according to the frequency (or wavelength) of the light wave. This includes (in order of increasing frequency): natural electromagnetic waves, radio waves, microwaves, terahertz radiation, infrared (IR) radiation, visible light, ultraviolet (UV) radiation, X-rays and gamma rays. Of these, natural electromagnetic waves have the longest wavelengths and gamma rays have the shortest. A small window of frequencies, called visible spectrum or light, is sensed by the eye of various organisms, with variations of the limits of this narrow spectrum.

Sound is vibration transmitted through a solid, liquid, or gas; particularly, sound means those vibrations composed of frequencies capable of being detected by ears. For humans, hearing is limited to frequencies between about 20 Hz and 20,000 Hz (20 kHz), with the upper limit generally decreasing with age. Other species have a different range of hearing. For example, dogs can perceive vibrations higher than 20 kHz. As a signal perceived by one of the major senses, sound is used by many species for detecting danger, navigation, predation, and communication.

The mechanical vibrations that can be interpreted as sound are able to travel through all forms of matter: gases, liquids, solids, and plasmas. The matter that supports the sound is called the medium. Sound cannot travel through vacuum.

Sound is transmitted through gases, plasma, and liquids as waves, also called compression waves. Through solids, however, it can be transmitted as both longitudinal and transverse waves. Longitudinal sound waves are waves of alternating pressure deviations from the equilibrium pressure, causing local regions of compression and rarefaction, while transverse waves in solids, are waves of alternating shear stress.

Matter in the medium is periodically displaced by a sound wave, and thus oscillates. The energy carried by the sound wave converts back and forth between the potential energy of the extra compression (in case of longitudinal waves) or lateral displacement strain (in case of transverse waves) of the matter and the kinetic energy of the oscillations of the medium.

Transverse waves, also known as shear waves, have an additional property of polarization.

Sound characteristics can depend on the type of sound waves (longitudinal versus transverse) as well as on the physical properties of the transmission medium.

Whenever the pitch of the soundwave is affected by some kind of change, the distance between the sound wave maxima also changes, resulting in a change of frequency. When the loudness of a soundwave changes, so does the amount of compression in airwave that is travelling through it, which in turn can be defined as amplitude.

In music and acoustics, the frequency of the pitch A above middle C on a piano is usually defined as 440 Hz, that is, 440 cycles per second () and known as concert pitch, to which an orchestra tunes.

As a matter of convenience, longer and slower waves, such as ocean surface waves, tend to be described by wave period rather than frequency. Short and fast waves, like audio and radio, are usually described by their frequency instead of period. These commonly used conversions are listed below:

Other types of frequency

Angular frequency is measured in radians per second (rad/s).