People backing up the service come from a variety of businesses, institutions and different countries, but mostly from Slovenia. All the information are somehow connected to the Earth and Space (geocoded). The Internet applications, which are running mostly on client side, enable the viewing of maps, aerial photography and satellite imagery. They reveal the Earth from above and the Space from below. Many specific layers of different content can be pasted over those maps and images. Time dependent information is calculated on-line.

Motto: GeaBios is a process not a fixed solution.

In 1999 the first application named Aviator 2000 2D/3D map over Internet came out. It was created in Javascript (DHTML) with additional ActiveX/OpenGL plug-in. The application had little uptake, as Netscape Communicator, which did not support ActiveX, had a large market share at that time. Users complained because they were not able to use the 3D modules. To avoid that, developers created 2D Java 1.1 based interface and soon removed ActiveX application. For Internet Explorer users with Microsoft's JRE 1.1 the applications are still written in Java 1.1. Due to well known problems of Gecko's Java Live Connect the applications are being gradually transferred to Flash.

The basic principle in the design of the service is to “Keep it as simple as possible, but not more than that”. Through offering a wide range of general interest data and useful services free of charge, the service is attractive for users in spite the fact that it is not always simple to use. GeaBios offers a variety of information and services, adding new ones constantly. Some of them are:

Information is provided in a wide range of displays, which include text, images, photographs, maps all of them inter related, and a lot of them time dependent. It is possible to locate information either from a graphical image (e.g. map) or from text. Applications are inter-connected and influence each other, for example, pre-defined flight over Julian Alps can drive a two-dimensional map (if available) to show the position and view angle. The same technique is used for GPS navigation. Most importantly, the applications act as components, they can work alone or together. 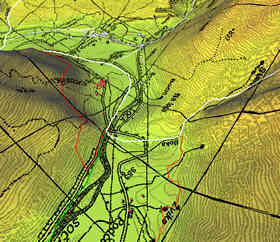 Maps and geocoded data were obtained legally from the following companies and institutions:

The web page is created as RIA. The content is loaded in the background, javascript methods are changing the DOM of the main page, which acts like a layout manager with so called floating windows. Different applications run concurrently in the environment of the web page and communicate among each other. The applications are built as pure javascript, java applets and flash applets.

A private company Academa Ltd is funding the GeaBios project entirely from its own sources. 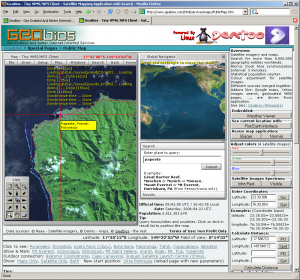 Overview: Satellite imagery and maps. Search for more than 8,000,000 geographic entities worldwide. Different sources merged together. Addons like: Google maps, Yahoo images search, geolocated Web pages, ..., are driven from the application. It is based on Open Geospatial Consortium standards, and is created with Open Laszlo (open source development platform) and DHTML.