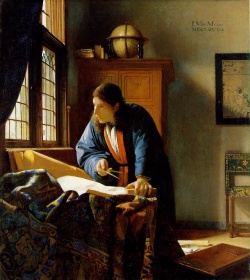 The Geographer by Johannes Vermeer

A geographer is a scientist whose area of study is geography, the study of Earth's physical environment and human habitat.

Though geographers are historically known as people who make maps, map making is actually the field of study of cartography, a subset of geography. Geographers study not only the physical details of the environment but also its impact on human and wildlife ecologies, weather and climate patterns, economics, and culture. They are often especially focused on the spatial relationships between these elements.[1]

Physical geographers identify, analyze, and interpret the distribution and arrangement of landforms and other features of the earth's surface. Modern geographers are often involved in resolving environmental problems. Many modern geographers are also the primary practitioners of geographic information systems and cartography. They are often employed by local, state, and federal government agencies as well as in the private sector by environmental and engineering firms.

There is a well-known painting by Johannes Vermeer titled The Geographer, which is often linked to Vermeer's The Astronomer. These paintings are both thought to represent the growing influence and rise in prominence of scientific enquiry in Europe at the time of their painting, 1668–69.

There are two major fields of study, which are further subdivided:

While there are numerous areas of study within geography, specific importance is placed upon the human and social aspects of the natural environment. Core examples of this can be seen in fields such as natural hazards, where, not only are the geophysical aspects studied in great detail (such as in geology), but also the human aspects.