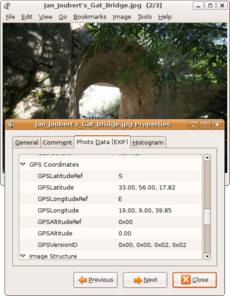 Geotagging is the process of adding geographical identification metadata to various media such as photographs, video, websites, or RSS feeds and is a form of geospatial metadata. These data usually consist of latitude and longitude coordinates, though they can also include altitude, bearing, accuracy data, and place names.

Geotagging can help users find a wide variety of location-specific information. For instance, one can find images taken near a given location by entering latitude and longitude coordinates into a Geotagging-enabled image search engine. Geotagging-enabled information services can also potentially be used to find location-based news, websites, or other resources.[1]

Less commonly, this process has been called geocoding (ie. a geocoded photograph), a term that more often refers to the process of taking non-coordinate based geographical identifiers, such as a street address, and finding associated geographic coordinates (or vice versa for reverse geocoding), or to the use of a camera that inserts the coordinates when making the picture, for example using its built-in GPS receiver.

The base for geotagging is positions. The position will in almost every case, be derived from the global positioning system, and based on a latitude/longitude-coordinate system that presents each location on the earth in a coordinate spanning from 180° west through 180° east along the Equator and 90° north through 90° south along the prime meridian.

GPS coordinates may be represented in text in a number of ways, with more or fewer decimals:

Geotagging is used to tell users rather precisely the location of the content of a given picture or other media, and conversely on some media platforms (such as Google Earth) to show media relevant to a given location. 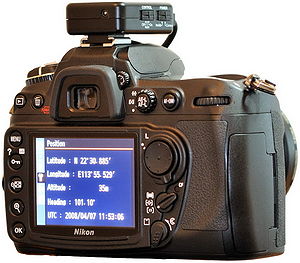 Digital camera with GPS logger mounted on the hot shoe

With photos stored in JPEG file format, the geotag information is typically embedded in the metadata, stored in Exchangeable image file format (EXIF) or Extensible Metadata Platform (XMP) format. These data are not visible in the picture itself but are read and written by special programs and most digital cameras and modern scanners. Latitude and longitude are stored in units of degrees with decimals[2]. This geotag information can be read by many programs, such as the cross-platform open source ExifTool. An example readout for a photo might look like:

Or the same coordinates could also be presented as decimal degrees:

When stored in EXIF, the coordinates are represented as a series of rational numbers in the GPS sub-IFD. Here is a hexadecimal dump of the relevant section of the EXIF metadata (with big-endian byte order): 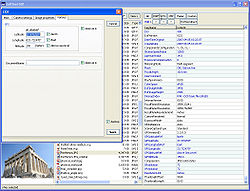 Manually geotagging an image of the Parthenon with ExifToolGUI

There are several ways to geotag digital photographs, however the method used can affect the accuracy of the location:

The similar Geo Tag format allows the addition of placename and region tags:

The RDF method is defined by W3 Group and presents the information in RDF tags[5]:

The Geo microformat allows coordinates within HTML pages to be marked up in such a way that they can be "discovered" by software tools. Example:

(giving a live Geo microformat on this page).

A proposal has been developed[6] to extend Geo to cover other bodies, such as Mars and the Moon.

An example is the Flickr photo-sharing Web site, which provides geographic data for any geocoded photo in all of the above-mentioned formats.

On Wikipedia it is possible to include geotagged information in articles (and thus also images), using the {{coord}} template. The inserted coordinates will then be presented, in the top right corner, as a link on the Wikimedia Toolserver[7], where one then has the ability to click further on to different geographic content on the Internet. For the Wikipedia article "Råbjerg Mile" it looks like this:

No industry standards exist, however there are a variety of techniques for adding geographical identification metadata to an information resource. One convention, established by the website Geobloggers and used by more and more sites, e.g. photo sharing sites Panoramio and Flickr, and the social bookmarking site del.icio.us, enables content to be found via a location search. All sites allow users to add metadata to an information resource via a set of so-called machine tags (see folksonomy).

The tags above describe the geographic coordinates of a particular location in terms of latitude (geo:lat) and longitude (geo:lon). These are expressed in decimal degrees in the WGS84 datum, which has become something of a default geodetic datum with the advent of GPS.[citation needed]

Using three tags works within the constraint of having tags that can only be single 'words'. Identifying geotagged information resources on sites like Flickr and del.icio.us is done by searching for the 'geotagged' tag, since the tags beginning 'geo:lat=' and 'geo:lon=' are necessarily very variable.

Another option is to tag with a Geohash:

A further convention proposed by FlickrFly adds tags to specify the suggested viewing angle and range when the geotagged location is viewed in Google Earth:

These three tags would indicate that the camera is pointed heading 225° (south west), has a 45° tilt and is 560 metre from the subject.

Both Panoramio (which is focused on showing geotagged pictures of the world) and Flickr, has the generated and place a picture from JPEG-metadata coordinates (as described above).

Where the above methods are in use, their coordinates may differ from those specified by the photo's internal EXIF data, for example because of a correction or a difference between the camera's location and the subject's.

The progression of GPS technology, along with the development of various online applications such as Flickr, has fueled the popularity of such tagged blogging,[citation needed] and the combination of GPS Phones and GSM localization, has led to the moblogging, where blog posts are tagged with exact position of the user.

On November 19, 2009, the Microblogging Service Twitter announced a Geotagging API for their "Tweets".[8] Tweets are short posts by users that are 140 characters or less. Through this API, third-party clients can allow users to Geotag their tweets with their exact location and provide more context to users about their surroundings.

GeoTagging in Twitter is an Opt-In service and is turned off by default.[9]

Geotagging tweets allows users of the service to: