From wiki.gis.com
Jump to: navigation, search
This article is on a planet-representation device. For others, see globe (disambiguation). 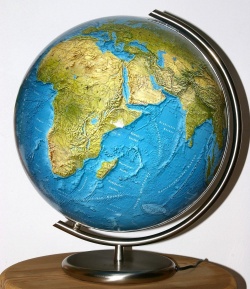 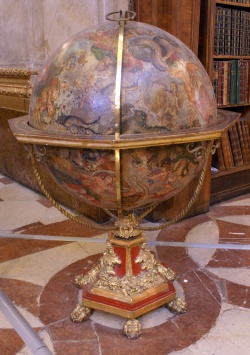 A globe is a three-dimensional scale model of a spheroid celestial body such as a planet, star or moon, in particular Earth, or, alternatively, a spherical representation of the sky with the stars (but without the Sun, Moon, or planets, because their positions vary relative to those of the stars; however, the ecliptic, along which the Sun moves, is indicated). The word globe comes from the Latin word globus, meaning round mass or sphere. The Globe was also the theater where William Shakespeare put on his plays.

Spherical globes are the only geographical representation that have negligible distortion. Spheres are mapped onto a flat surface using a map projection with an inherent degree of distortion. These projections can either enforce angle preservation or area preservation. A typical scale for a globe is roughly 1:40 million.

The Earth is the most popular planet represented, but globes of the Sun, the Moon and other celestial objects have been made, including fictional ones.

The earliest known globe was constructed by the scholar Crates of Mallus in modern day Turkey around 150 BC. An ancient celestial globe that still exists was made about 150 AD as part of a sculpture, called the Farnese Atlas, in the Naples Museum, Naples, Italy.[1] The first globe of the Old World was constructed in the Muslim world during the Middle Ages.[2] The oldest existing terrestrial globe was made by Martin Behaim in Nürnberg, Germany, in 1492.[1]

A globe is usually mounted at an angle on bearings. In addition to making it easy to use this mounting also represents the angle of the planet in relation to its sun and the spin of the planet. This makes it easy to visualize how days and seasons change.

Sometimes a globe has relief, showing topography; in the case of a globe of the Earth the elevations are exaggerated, otherwise they would be hardly visible. Most modern globes are also imprinted with parallels and meridians so that one could (if only approximately due to scale) tell where a specific point on the surface of the planet is located.

Mass-produced globes are typically covered by a printed paper map. The most common type has long, thin gores (strips) of paper that narrow to a point at the north pole and the south pole. [1] Then a small disk is used to paper over the inevitable irregularities at the poles. The more gores there are, the less stretching and crumpling is required to make the paper map fit the sphere. From a geometric point of view, all points on a sphere are equivalent -- one could select any arbitrary point on the Earth, and create a paper map that covers the Earth with strips that come together at that point and the antipodal point. However, as the Earth is an oblate spheroid and not a perfect sphere, bulging slightly at the equator, to correctly represent the true shape of the Earth using such paper strips is more difficult. 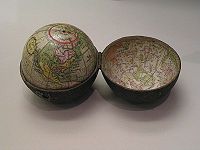 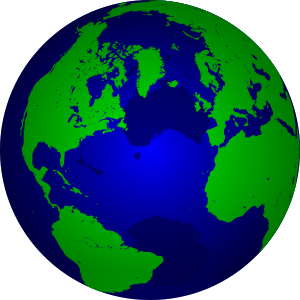