From wiki.gis.com
Jump to: navigation, search
For other uses, see Glyph (disambiguation).

Various glyphs representing the character a in the Zapfino typeface.

A glyph (pronounced /ˈɡlɪf/) is an element of writing. It is a slightly vague term, but a more precise definition might be an individual mark on paper or another written medium which contributes to the meaning of what is written there. A grapheme is made up of one or more glyphs.

In most languages, the dot on a lower-case 'i' is not a glyph because it does not convey any distinction, and an i in which the dot has been accidentally omitted is still likely to be read as an 'i'. However in Turkish it is a glyph, because that language has two distinct versions of the letter 'i', with and without a dot.

In Japanese syllabaries, a number of the characters are made up of more than one separate mark, but in general these separate marks are not glyphs because they have no meaning by themselves. However in some cases, an additional mark or marks fulfil(s) the role of a diacritic, and differentiate(s) two different characters. In this case the addtional mark(s) constitute a glyph.

In general a diacritic is a glyph, even if (like a cedilla in French or Romanian, or a Polish ogonek, or the stroke on a Polish L) it is "joined up" with the rest of the character.

Some characters such as æ in Icelandic and the ß in German would probably be regarded as a glyphs: they were originally ligatures but over time have become characters in their own right, and the language treats them as separate letters. However a ligature such as "ffi", which is treated in some typefaces as a single unit, is arguably not a glyph as this is just a quirk of the typeface, is essentially an allographic feature, and includes more than one grapheme. In normal handwriting, even long words are often written "joined up", without the pen leaving the paper, and the form of each written letter will often vary depending on which letters precede it and follow it, but that does not make the whole word into a single glyph!

Two or more glyphs which have the same significance, whether used interchangeably or chosen depending on context, are called allographs of each other.

The term has been used in English since 1727, borrowed from glyphe (in use by French antiquaries since 1701), from the Greek γλυφή, glyphē, "carving," and the verb γλϝφειν, glýphein, "to hollow out, engrave, carve" (cognate with Latin glubere "to peel" and English cleave).

Compare the carved and incised "sacred glyphs" hieroglyphs, which have had a longer history in English, dating from the first Elizabethan translation of Plutarch, who adopted "hieroglyphic" as a Latin adjective.

File:MAYA-g-log-cal-D10-Ok.png
Maya glyph for Day 10 of the tzolkin calendar.

But the word "glyph" first came to widespread European attention with the engravings and lithographs from Frederick Catherwood's drawings of undeciphered glyphs of the Maya civilization in the early 1840s.

In archaeology, a glyph is a carved or inscribed symbol. It may be a pictogram or ideogram, or part of a writing system such as a syllable, or a logogram. 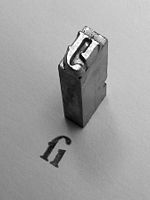 The adjacent characters ſi represented as one glyph.

In typography, a glyph has a slightly different definition: it is a property of a typeface. It is a particular graphical representation, in a particular typeface, of an element of written language, which could be a grapheme, or part of a grapheme, or sometimes several graphemes in combination (a composed glyph[1]). If there is more than one allograph of a unit of writing, and the choice between them depends on context or on the preference of the author, they now have to be treated as separate glyphs, because mechanical arrangements have to be available to differentiate between them and to print whichever of them is required. The same is true in computing.In computing as well as typography, the term character refers to a grapheme or grapheme-like unit of text, as found in natural language writing systems (scripts). In typography and computing, the range of graphemes is broader than in a written language in other ways too: a typographical font often has to cope with a range of different languages each of which contribute their own graphemes, and it may also be required to print other symbols such as dingbats. The range of glyphs required increases correspondingly. In summary, in typography and computing, a glyph is a graphical unit.

Most typographic glyphs originate from the characters of a typeface. In a typeface each character typically corresponds to a single glyph, but there are exceptions, such as a font used for a language with a large alphabet or complex writing system, where one character may correspond to several glyphs, or several characters to one glyph.

In graphonomics, the term glyph is used for a non-character, i.e: either a sub-character or multi-character pattern.