Google Mars was at first an in-browser version of Google Maps which provides a visible imagery view, like Google Moon, as well as infrared imagery and shaded relief (elevation) of the planet Mars. Users can toggle between the elevation, visible, and infrared data, in the same manner as switching between map, satellite, and hybrid modes of Google Maps. In collaboration with NASA scientists at the Mars Space Flight Facility located at Arizona State University, Google Mars provided the public with data collected from two NASA Mars missions, Mars Global Surveyor and 2001 Mars Odyssey. 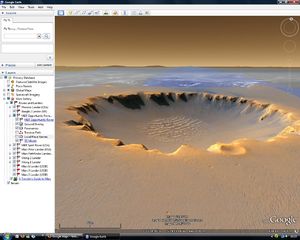 Google Earth version 5, released February 2, 2009, included a separate globe of the planet Mars that could be viewed. The images there are of a much higher resolution than those on the browser version, and include 3D renderings of the Martian terrain. There are also some extremely high resolution images from the Mars Reconnaissance Orbiter's HiRISE camera that are of a similar resolution to those of the cities on Earth. Finally, there are many high resolution panoramic images from various Mars landers such as the Mars Exploration Rovers, Spirit and Opportunity that can be viewed in a similar way to Google Street View

Near the Face On Mars there is a robotic icon where upon clicking it; brings up a chat window. The "Martian" that you can talk to is named Meliza, named after Eliza: an early chatbot. After consistent use it is almost definite that Meliza is a chatbot, mainly because it is prone to weaknesses in conversation.