The Great Britain Historical GIS (or GBHGIS), is a spatially-enabled database that documents and visualises the changing human geography of the British Isles,[1] although is primarily focussed on the subdivisions of the United Kingdom mainly over the 200 years since the first census in 1801. The project is currently based at the University of Portsmouth, and is the provider of the website A Vision of Britain through Time.

The first version of the GB Historical GIS was developed at Queen Mary, University of London between 1994 and 1999, although it was originally conceived simply as a mapping extension to the existing Labour Markets Database (LMDB). The system included digital boundaries for Registration Districts and Poor Law Unions (c.1840 to 1911), Local Government Districts (1911 to 1974), and Parishes (1870s to 1974). These boundaries were held not as polygons but as line segments (arcs), using ArcGIS software. Dates of creation and abolition were held for each line segment (or "arc") and custom software was developed to assemble line segments into polygons, creating conventional boundary maps for particular dates. Meanwhile, the Labour Markets Database evolved into the Great Britain Historical Database (GBHDB), which stored a large collection of historical statistics from the census, vital registration and records of poverty and economic distress. These were held in thousands of columns within hundreds of separate tables, within an Oracle database. This system is described in detail in Gregory and Southall (1998), and in Gregory and Southall (2002).

The second version of the GB Historical GIS was developed at the University of Portsmouth from 2000 onwards. The work was mainly funded by the UK National Lottery, so the results had to be useful to a far wider audience than most historical GIS projects.

This is a true spatial database in which all content is held in Oracle, although GIS software is used to edit content. It is designed to overcome limitations of the original system:

This new version of the GB Historical GIS also included several other kinds of content:

All of this new content is held in the same Oracle database and linked to the polygons and statistics inherited from the original GBHGIS.

Three complete sets of one inch to one mile maps of Great Britain have been scanned and geo-referenced, each accompanied by less detailed maps from the same period:

This collection of historical maps is not held in the main Oracle system. They are instead managed using open source MapServer software. However, they are mainly accessed via MapServer's implementation of the Open Geospatial Consortium's Web Map Service standard. This is how they are used by the GB Historical GIS project's Vision of Britain system, but they are also available for use as base maps by other web sites.

Britain has had an unusually large number of changes to its local government geography, and the current districts date back only to 1996, to 1974 or, in London, to 1965. As census reporting has always been based on local government units, it is hard to study how any particular area has changed in the long term. One of the main reasons for building the GB Historical GIS was to enable demographic and social statistics to be 're-districted from various historical units to modern districts. This is done using a vector overlay methodology, using parish-level counts of total population to weight the reallocation of district-level data.

This methodology has been used to replicate the most important statistics from the Key Statistics release from the 2001 census for many earlier dates, including total population from 1801, occupational structure for selected censuses from 1841 onwards, and age and gender structure for every census from 1851 onwards.

A Vision of Britain through Time

Components of the GB Historical GIS are available for download by academic researchers from the UK Data Archive and from EDINA's UKBORDERS system. However, the main way most people can access the system is via the Vision of Britain web site, developed by the GB Historical GIS project with their lottery funding.

The site is designed mainly as a resource for studying local history but also includes extensive mapping facilities. It includes home pages both for "places", i.e. towns and villages, and for the individual administrative units based on places. Administrative unit pages provide access to census statistics for the unit, to boundary maps and to formal information on official names and status, relationships with other units and boundary changes. All these web pages are generated by software from the data held in the underlying GB Historical GIS. Many Wikipedia pages refer to Vision of Britain.

Vision of Britain is an unusual web site as it is database-driven, but uses the ontologies in the underlying system to create clickable links between pages: most pages the site can create can be reached without filling out a search form, or clicking on an image map, and this makes the site's content generally accessible to search engines. One result is that Google searches for historical information for particular places in Britain are very likely to return links to Vision of Britain. For the most reliable results, search in Google for "place county history"; for example, "Portsmouth Hampshire History".

For a detailed guide to using the Vision of Britain system for research into local history, see Southall (2006).

The post-2000 GB Historical GIS makes no use of commercial GIS software, except for editing parts of the content, and implements a data model which could not be implemented using packages such as ArcGIS or MapInfo, so is it a GIS at all? It is certainly not a conventional GIS, but one answer is that any system that can create an image like the one shown below is some kind of GIS. This image from A Vision of Britain through Time combines the boundaries of local government districts, data on unemployment from the 1931 census, and a scanned image of an Ordnance Survey ten mile-to-one inch map from the early 20th century. 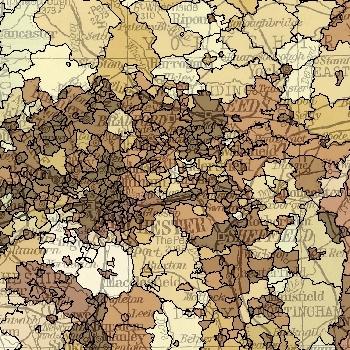 A new system is being developed, partly with funding from the European Union under the QVIZ project, which will no longer be limited to Great Britain:

An enhanced web site based on this extended system will be launched in 2009.