Hachures are an older mode of representing relief and show the orientation of slope and steepness. Being non-numeric, they are less useful to a scientific survey than contours, but can successfully communicate quite specific shapes of terrain by showing their thickness and overall density of hachures. They are a form of shading, although different from the one used in shaded maps. Hachure representation of relief was standardized by the Austrian topographer Johann Georg Lehmann in 1799[1]. Hachures may be combined with other ways of representing relief, like shades, the result being a shaded hachure map; an example of such maps are the Dufour maps of Switzerland[2]. Emil von Sydow designed maps with coloured hachures: green for lowlands and brown for highlands. 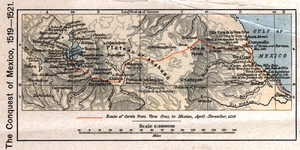 Hachures are strokes (short line segments or curves) drawn in the direction of the steepest slope (the aspect direction)[1]. Steeper slopes are represented by thicker, shorter, and closer strokes, while gentler slopes are represented by thinner, longer, and farther apart strokes. A very gentle slope or a flat area, like the top of a hill, are usually left blank. The hachures are traditionally monocolour, usually black, grey or brown; using two complementary colours for the hachures on a neutral background colour (e.g. black and white lines on grey map colour) would give a shading effect as if the relief were illuminated. Hachures are typically done by hand as they require some sort of artistic ability. They are generally associated with manual cartography although some attempts have been made to have computers draw the hachures, they aren't as successful or elegant as hand-drawn hachures.[3] 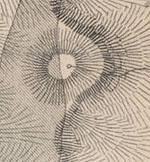 An example of hachure map.

In representing relief with hachures on a map, six rules are to be followed according to G.R.P. Lawrence (1979) [4]:

If the illumination is vertical, rule 5 is kept; in the case of oblique illumination, it is dropped. The rules above are to be obeyed for large-scale maps. If the map being drawn is a small-scale map (less than 1:500 000 according to Imhof), rules may be relaxed in order to obtain a more suggestive representation.[6]

Hachures are still used today on large-scale maps to show slopes and on British Ordnance Survey Maps and also in various countries toposheets to show Road and Railway Cutting and Embankments.