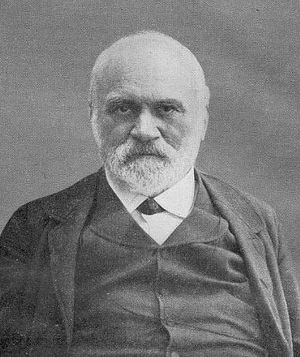 Already in his youth he traveled with his parents and had a particular interest in the geographic circumstances, which he carefully sketched. Among the friends of the family was the historian Leopold von Ranke, which advised the parents to support the boy's innate talent. The teacher and director of the gymnasium he attended was the young philologist August Meineke. He could fill the young Heinrich Kiepert with enthusiasm for the classical antiquity. During this time Kiepert already criticized the faulty execution of historic maps in school books.

He was educated at the university of berlin, studying especially history, philology and geography. In 1840, in collaboration with Karl Ritter, he issued his first work, Atlas von Hellas und den hellenischen Kolonien, which brought him at once into eminence in the sphere of ancient historical cartography.

In 1848 his Historisch-geographischer Atlas der alten Welt appeared, and in. 1854 the first edition of the Atlas antiquus, which has obtained very wide recognition, being issued in English, French, Russian, Dutch and Italian.

In 1894 Kiepert produced the first part of a larger atlas of the ancient world under the title Formae orbis antiqui; his valuable maps in Corpus inscriptionum latinarum must also be mentioned. In 1877 his Lehrbuch der alten Geographie was published, and in 1879 Leitfaden der alten Geographie, which was translated into English (A Manual of Ancient Geography, 1881) and into French.

Among Kiepert's general works one of the most important was the excellent Neuer Handatlas über alle Teile der Erde (1855 et seq.), and he also compiled a large number of special and educational maps. Asia Minor was an area in which he took particular interest. He visited it four times in 1841-8; and his first map (1843-1846), together with his Karte des osmanischen Reiches in Asien (1844 and 1869), formed the highest authority for the geography of the region.

Kiepert was professor of geography in the university of Berlin from 1854. He died at Berlin on April 21, 1899. He left unpublished considerable material in various departments of his work, and with the assistance of this his son Richard (b. 1846), who followed his father's career, was enabled to issue a map of Asia Minor in 24 sheets, on a scale of 1:400,000 (1902 et seq.), and to carry on the issue of Formae orbis antiqui.