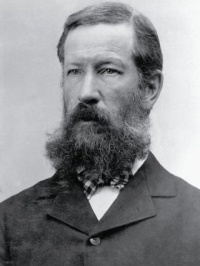 Henry Gannett, M.E.; LL.D. ((August 24, 1846 - November 5, 1914) was an American geographer who is described as the "Father of the Quadrangle (geography)" which is the basis for topographical maps in the United States.

He was born in Bath, Maine, graduated with a B.S. at Harvard University in 1869 and at the Hooper Mining School in 1870 also at Harvard.

In 1871 he was almost simultaneously offered positions with Charles Francis Hall on what would become the ill-fated Polaris Expedition or going with Ferdinand Vandeveer Hayden to survey Yellowstone National Park. He chose the Hayden adventure and would map the westen portion of the Hayden's division until 1879.

On July 26, 1872 while climbing the then unnamed highest mountain in the Gallatin Mountains, he and his party experience electric shocks following a lightning event near the summit. He was to name the mountain Electric Peak.

The Father of Government Mapmaking

In 1879 he was among those lobbying for centralizing the mapping functions into one government agency. Previously individual mapmakers and agencies had to compete for money from Congress for funds for projects.

His first job in the new organization under its first director Clarence King was geographer of the United States Census, 1880. He laid out 2,000 enumeration districts with such precision that for the first time each census enumerator knew in advance the metes and bounds of his particular district. The completion of this work on July 1, 1882 is considered the start of true topographical work in the United States and the birth of the quad. He was promoted to Chief Geographer for the Geological Society by John Wesley Powell and would hold the position until 1896.

In 1883 Gannett was one of founding members of the National Geographic Society. He would become serve as it first secretary, then treasurer, then vice-president, and finally president in 1909.

In 1884 he published his first Dictionary of Altitudes which listed all known survey altitudes in the United States as well as the source of the survey. He was to perusade various organizations doing the surveys including the railroads to begin using similar datums so the data could interconnect.

In 1885 he published Boundaries of the United States and of the Several States and Territories, with a Historical Sketch of the Territorial Changes, which was the first attempt to standardize the history of the boundaries in the country.

In 1890 he and Thomas Corwin Mendenhall of the U.S. National Geodetic Survey campaigned to establish the United States Board on Geographic Names to create official names for locations in the United States.

In 1893 A Manual of Topographic Methods which was the basis for standardizing survey and mapping processes.

In 1896 in his last year with the USGS, he started the use of the Benchmark (surveying).

In 1904 he was among the founders of the American Association of Geographers.

In 1906 Gannett Peak, the highest peak in Wyoming, was named for him.

In 1909 he was named chairman of a special committee to examine and verify the records of Robert E. Peary in the controversy with Frederick Cook over who was the first to reach the North Pole.