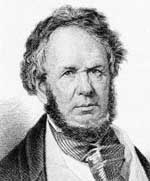 Henry Rowe Schoolcraft (March 28, 1793–December 10, 1864) was an American geographer, geologist, and ethnologist, noted for his early studies of Native American cultures, as well as for his discovery in 1832 of the source of the Mississippi River. He married Jane Johnston, who was of Ojibwe and Scots-Irish descent. Her knowledge of the Ojibwe language and of Ojibwe legends, which she shared with Schoolcraft, formed in part the source material for Longfellow's epic poem, The Song of Hiawatha. She has been recognized as the first Native American literary writer and first Native American poet.[1]

Schoolcraft was born in Guilderland, near Albany, New York, the son of Lawrence Schoolcraft and Anne Barbara (Rowe) Schoolcraft. He entered Union College at age fifteen and later attended Middlebury College. He was especially interested in geology and mineralogy. His father was a glassmaker and he initially studied and worked in the same industry. He wrote his first paper on the topic, Vitreology (1817). After working in several glass works in New York, Vermont and New Hampshire, he left the family business at age twenty-five to explore the western frontier.

From November 1818 to February 1819, Schoolcraft and his companion Levi Pettibone made an expedition from Potosi, Missouri to what is now Springfield, Missouri. They traveled further down the White River into Arkansas, making a survey of the geography, geology, and mineralogy of the area. Schoolcraft published this study in A View of the Lead Mines of Missouri (1819). In this book he correctly identified the potential for lead deposits in the region; Missouri eventually became the number one lead-producing state. He also published Journal of a Tour into the Interior of Missouri and Arkansaw (1821), the first written account of an exploration of the Ozarks.

His expedition and books brought Schoolcraft to the attention of Secretary of War, John C. Calhoun, who saw him as "a man of industry, ambition, and insatiable curiosity." Calhoun recommended him to the Michigan Territorial Governor, Lewis Cass, for a position on an expedition. Cass was to explore the wilderness region of Lake Superior and the lands west to the Mississippi River. Beginning in the spring of 1820, Schoolcraft served as a geologist on the Cass expedition. Beginning in Detroit, it traveled nearly 2000 miles along Lake Huron and Lake Superior, west to the Mississippi River, down the river to present-day Iowa, and then returning to Detroit after tracing the shores of Lake Michigan.

In 1821 he was a member of another government expedition that traveled through Illinois, Indiana and Ohio.

Schoolcraft met his future wife soon after being assigned to Sault Ste. Marie as the first US Indian agent there in 1822. Two years before the government had built Fort Brady, and wanted to establish official presence to forestall any renewed British threat following the War of 1812. The government tried to ensure against British agitation of the Ojibwa.

Schoolcraft married Jane Johnston, eldest daughter of John Johnston, a prominent Scots-Irish fur trader and Ozhaguscodaywayquay or Susan Johnston, daughter of a leading Ojibwe chief, Waubojeeg. The Johnstons had eight children, and their cultured, wealthy family was well-known in the area.[2] Jane was also known as O-bah-bahm-wawa-ge-zhe-go-qua (or Obabaamwewe-giizhigokwe in modern spelling) (The Woman of the Sound [Which the Stars Make] Rushing Through the Sky).

Jane and Henry had four children together, of whom William Henry died young at age four, one was stillborn, then John and Jane (called Janee) were born about two years apart. Their children John and Janee attended boarding school in the East for part of their education. The Schoolcrafts had a literary marriage, producing a family magazine, and including their own poetry in letters to each other through the years. Jane Johnston Schoolcraft suffered from frequent illnesses. She died in 1842, while visiting a sister in Canada, and was buried at St. John's Anglican Church, Ancaster, Ontario.[3]

About 1846, after moving to Washington, DC, Schoolcraft married again, to Mary Howard, a southern slaveholder. Her ideas about slavery and opposition to mixed-race unions created strains with the Schoolcraft stepchildren.[4] Mary Schoolcraft wrote the novel The Black Gauntlet: A Tale of Plantation Life in South Carolina, a defense of slavery published in 1860, on the eve of the Civil War.[5]

Schoolcraft began his ethnological research in 1822 during his appointment as Indian agent at Sault Ste. Marie, Michigan. From his wife Jane Johnston, Schoolcraft learned the Ojibwe language, as well as much of the lore of the tribe. Together they wrote for The Literary Voyager, a family magazine which they produced in 1826-1827 and circulated among friends. Johnston Schoolcraft used pen names of "Rosa" and Leelinau as personae to write about different aspects of Indian culture.[6]

From 1828 to 1832 Schoolcraft also served in the legislature of the Michigan Territory. In 1832, Schoolcraft journeyed again to the upper reaches of the Mississippi to settle continuing troubles between the Chippewa and Sioux nations. He reached out to talk to as many Native American leaders as possible to maintain the peace. He was also provided with a surgeon and given instructions to begin vaccinating Indians against smallpox. He determined that smallpox had been unknown among the Chippewa before the return in 1750 of a war party that had European contact on the East Coast. They had gone to Montreal to assist the French against the British in the French and Indian War.

During the voyage, Schoolcraft took the opportunity to explore the region, making the first accurate map of the Lake District around western Lake Superior. He discovered the true headwaters of the Mississippi River in Lake Itasca, a name which he coined from the Latin words veritas meaning 'truth' and caput meaning 'head'.[7] The nearby Schoolcraft River, the first major tributary of the Mississippi, was later named in his honor. American newspapers widely covered this expedition. Schoolcraft followed up with his own account of the discovery, Narrative of an Expedition Through the Upper Mississippi River to Itasca Lake (1834).

In 1833 Schoolcraft and his wife moved to Mackinac Island, the new headquarters of his administration as an Indian agent after his territory was greatly increased.

In 1836, he was instrumental in settling land disputes with the Chippewas. He worked with them to accomplish the Treaty of Washington (1836), by which they ceded to the United States a vast territory of more than 13 million acres (53,000 km²)—worth many millions of dollars. He believed that they would be better off learning to farm and giving up their wide lands. The government agreed to pay subsidies and provide supplies while they made a transition to a new way of living.

In 1838 pursuant to the terms of the treaty, Schoolcraft oversaw the construction of the Indian Dormitory on Mackinac Island, which survives. This was to house the Chippewa who came to Mackinac Island to receive allotments during their transition to what was envisioned as a more settled way of life.

While in Michigan, Schoolcraft became a member of the Board of Regents in the early years of the University of Michigan. In this position he helped establish the state university's financial organization. He founded and contributed to the first United States journal on public education, The Journal of Education. He also published The Souvenir of the Lakes, the first literary magazine in Michigan.[8]

When the Whig Party came to power in 1841 with the election of William Henry Harrison, Schoolcraft lost his position as Indian agent. He and Jane moved to New York. She was often ill and died in 1842 during a visit with a sister in Canada. Schoolcraft continued to write about Native Americans.

In 1846 Congress commissioned him to develop a comprehensive reference work on American Indian tribes. Schoolcraft traveled to England to request the services of George Catlin to illustrate his proposed work, as the latter was widely regarded as the premier illustrator of Indian life. Schoolcraft was deeply disappointed when Catlin refused. Schoolcraft later engaged artist Seth Eastman as illustrator, who had spent years on the upper Mississippi and was well-versed in Indian culture.

Schoolcraft's massive work, Historical and Statistical Information Respecting...the Indian Tribes of the United States was completed in six volumes published from 1851 to 1857. It was praised for its scholarship, valuable content, and meticulous and knowledgeable illustrations. It was also criticized for various shortcomings, including a lack of organization that made the information almost inaccessible. In 1954 the Bureau of American Ethnology prepared and published an index.

Schoolcraft named many of Michigan's counties and locations within the former Michigan Territory. He named Leelanau County, Michigan after his wife's pen name of "Leelinau".[9] For those counties established in 1840, he often created faux Indian names. In names such as Alcona, Allegan, Alpena, Arenac, Iosco, Kalkaska, Oscoda and Tuscola, for example, Schoolcraft combined words and syllables from Native American languages with words and syllables from Latin and Arabic.[10] Lake Itasca, the source lake of the Mississippi River, is another example of his faux Indian names.

The Schoolcraft River, a tributary of the Mississippi, was named for him.

U.S. Route 65 in Springfield, Missouri is named the "Schoolcraft Freeway" for him. In addition, there are "Schoolcraft Road"s in Marquette and Wayne Counties, Michigan, and in Dakota County, Minnesota.