From wiki.gis.com
Jump to: navigation, search
For other uses, see Horizon (disambiguation). 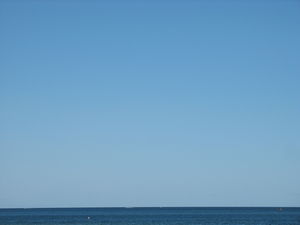 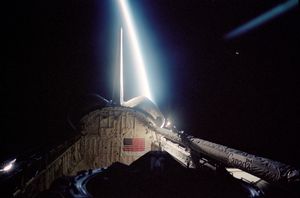 View of Earth's horizon as seen from Space Shuttle Endeavour, 2002.

The horizon (Ancient Greek Ὕ Ὕϝίζων, /ho horídzôn/, from Ὕϝίζειν, "to limit") is the apparent line that separates earth from sky.

It is the line that divides all visible directions into two categories: those that intersect the Earth's surface, and those that do not. At many locations, the true horizon is obscured by trees, buildings, mountains, etc., and the resulting intersection of earth and sky is called the visible horizon. When looking at a sea from a shore, the part of the sea closest to the horizon is called the offing.

Historically, the distance to the visible horizon at sea has been extremely important as it represented the maximum range of communication and vision before the development of the radio and the telegraph. Even today, when flying an aircraft under Visual Flight Rules, a technique called attitude flying is used to control the aircraft, where the pilot uses the visual relationship between the aircraft's nose and the horizon to control the aircraft. A pilot can also retain his or her spatial orientation by referring to the horizon.

In many contexts, especially perspective drawing, the curvature of the earth is typically disregarded and the horizon is considered the theoretical line to which points on any horizontal plane converge (when projected onto the picture plane) as their distance from the observer increases. For observers near the ground the difference between this geometrical horizon (which assumes a perfectly flat, infinite ground plane) and the true horizon (which assumes a spherical Earth surface) is typically imperceptibly small.

In astronomy the horizon is the horizontal plane through (the eyes of) the observer. It is the fundamental plane of the horizontal coordinate system, the locus of points that have an altitude of zero degrees. While similar in ways to the geometrical horizon, in this context a horizon may be considered to be a plane in space, rather than a line on a picture plane.

Distance to the horizon

In SI units, the straight line of sight distance d in kilometers to the true horizon on earth is approximately

where h is the height above ground or sea level (in meters) of the eye of the observer. Examples:

These formulas may be used when h is much smaller than the radius of the Earth (6371 km), including all views from any mountaintops, airplanes, or high-altitude balloons. The metric formula is accurate to about 1%; the imperial one is more accurate still.

A more exact formula for distance from the viewpoint to the horizon, applicable even for satellites, is

where R is the radius of the Earth (R and h must be in the same units). This formula follows directly from the Pythagorean Theorem (a right triangle can be drawn with vertices at the center of the Earth, your eyes, and the point on the horizon. If h is in meters,

and R is about 6378 km, then the distance in kilometers will be approximately

This formula is not exact since it assumes a constant earth radius.

Another relationship involves the arc length distance s along the curved surface of the Earth to the bottom of object:

Solving for s gives the formula

The distances d and s are nearly the same when the height of the object is negligible compared to the radius (that is, h<<R).

Optical adjustments and objects above the horizon

To compute the height of an object visible above the horizon, compute the distance-to-horizon for a hypothetical observer on top of that object, and add it to the real observer's distance-to-horizon. For example, standing on the ground with h = 1.70 m, the horizon is 4.65 km away. For a tower with a height of 100 m, the horizon distance is 35.7 km. Thus an observer on a beach can see the tower as long as it is not more than 40.35 km away. Conversely, if an observer on a boat (h = 1.7 m) can just see the tops of trees on a nearby shore (h = 10 m), they are probably about 16 km away.

Note that the actual visual horizon is slightly farther away than the calculated visual horizon, due to the atmospheric refraction of light rays. This effect can be taken into account by using a "virtual radius" that is typically about 20% larger than the true radius of the Earth.

Curvature of the horizon

From a point above the surface the horizon appears slightly bent. There is a basic geometrical relationship between this visual curvature

, the altitude and the Earth's radius. It is