From wiki.gis.com
Jump to: navigation, search
Hue, in its most basic meaning, is the classification of the rainbow color. More specifically, it is the dominant wavelength of color depicted by the name such as red, blue, or green. These colors range from 0-360; 0 = Red, 120 = green, blue = 240, etc. Each individual hue is determined and can be further classified by its chroma, saturation, intensity, value, and shade[1]. The hue is invariant under changes of direction and intensity of the incident light. The hue describes the dominant color ingredient that one perceives. For this reason, if we preserve the hue and enhance the brightness, the obtained image will appear more colorful[2]. 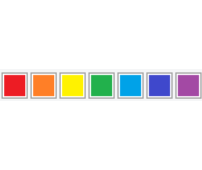 A simple example of hue, including red, blue, green.
Hues have a family of twelve purest and brightest colors; three primary colors, three secondary colors and six tertiary colors, which form a full spectrum of colors that progress around the primary color wheel. Hue is one of six color appearance parameters, the other four are chroma, saturation, lightness, brightness and colorfulness.

Active colors are brighter colors of hue such as red, yellow and orange. They tend to described as warm and give feelings of confidence and enthusiasm.