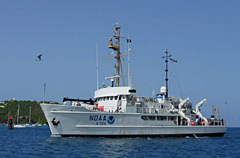 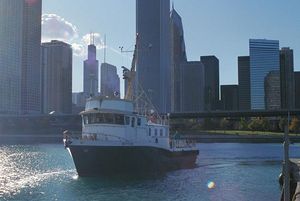 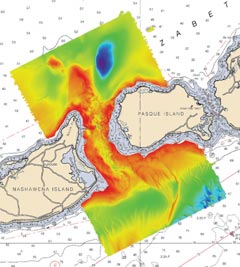 DTM - Digital Terrain Model
Hydrographic survey in its strictest sense is the process of gathering information about navigable waters for the purposes of safe navigation of vessels. It strictly applies to survey of any navigable waters, including lakes and rivers, but it is most commonly applied to marine navigation. The term may be more broadly used for a wide variety of data gathering exercises for the purpose of describing the seafloor for a variety of purposes. The largest hydrographic community globally is involved in the description of offshore oilfields from their initial design phase through to regular inspections of the infrastructure of a mature sub sea oil infrastructure. This may be commonly referred to as Offshore Survey.

Hydrography is collected under strict rules for evaluating and positioning the data so that it may be accurately charted. Data will include shore features of use to navigators as well as information about the waters and bottom. Traditionally conducted by vessels and with Echo sounding, surveys are increasingly conducted with the aid of aircraft and sophisticated electronic sensor systems in shallow waters. United States Navy SEALS and Seabee Underwater Construction Technicians also have the ability to conduct hydrographic surveys. The SEAL/UCT operators are normally called upon before amphibious landings in order to survey the landing beaches.

Surveys are most commonly conducted by or under the supervision of national organizations with responsibility for chart making and distribution. Coordination of those organizations voluntarily joined with the goal of improving hydrography and safe navigation is conducted by the International Hydrographic Organization.

Companies, Universities and investment groups will often fund Hydrographic surveys of public waterways prior to developing areas adjacent those waterways. One example of this would be surveys completed for Riverboat Casinos that ply inland rivers. These large ships require relatively shallow water, but it has to meet minimum depth requirements. Private surveys are also conducted before dredging operations and after these operations are completed. Steel mills and companies that have large private slips and docks have their facilities and open water near their facilities surveyed regularly.

Modern surveying relies as much on software as hardware. Equipment can be installed on inflatable craft, such as Zodiacs, small craft, AUVs (Autonomous Underwater Vehicles), UUVs (Unmanned Underwater Vehicles) or large ships, and can include sidescan, single beam and multibeam equipment.

After data is collected, it has to undergo post-processing. A massive amount of data is collected during the typical Hydrographic survey, often several soundings per square foot. Depending on the final use (navigation charts, Digital Terrain Model, volume calculation for dredging, topography, Bathymetry) this data must be thinned out. It must also be error corrected (bad soundings,) and corrected for the effects of tides, waves/heave, water level and water temperature differences (thermoclines.) Usually the surveyor has additional data collection equipment on site to record the data required for correcting the soundings. Final output of charts can be created in a combination of specialty charting software or a CAD package, usually Autocad.

NOAA maintains a massive database of survey results, charts, and data on the NOAA site.