Hypertext Transfer Protocol (HTTP) is an application-level protocol for distributed, collaborative, hypermedia information systems.[1] Its use for retrieving inter-linked resources led to the establishment of the World Wide Web.

HTTP development was coordinated by the World Wide Web Consortium and the Internet Engineering Task Force (IETF), culminating in the publication of a series of Requests for Comments (RFCs), most notably RFC 2616 (June 1999), which defines HTTP/1.1, the version of HTTP in common use.

Support for pre-standard HTTP/1.1 based on the then developing RFC 2068 was rapidly adopted by the major browser developers in early 1996. By March 1996, pre-standard HTTP/1.1 was supported in Netscape 2.0, Netscape Navigator Gold 2.01, Mosaic 2.7, Lynx 2.5, and in Internet Explorer 3.0. End user adoption of the new browsers was rapid. In March 1996, one web hosting company reported that over 40% of browsers in use on the Internet were HTTP 1.1 compliant. That same web hosting company reported that by June 1996, 65% of all browsers accessing their servers were HTTP 1.1 Compliant.[2] The HTTP 1.1 standard as defined in RFC 2068 was officially released in January 1997. Improvements and updates to the The HTTP/1.1 standard were released under RFC 2616 in June 1999.

HTTP is a request/response standard of a client and a server. A client is the end-user, the server is the web site. The client making an HTTP request—using a web browser, spider, or other end-user tool—is referred to as the user agent. The responding server—which stores or creates resources such as HTML files and images—is called the origin server. In between the user agent and origin server may be several intermediaries, such as proxies, gateways, and tunnels. HTTP is not constrained to using TCP/IP and its supporting layers, although this is its most popular application on the Internet. Indeed HTTP can be "implemented on top of any other protocol on the Internet, or on other networks." HTTP only presumes a reliable transport; any protocol that provides such guarantees can be used. Internet RFC 2616

Typically, an HTTP client initiates a request. It establishes a Transmission Control Protocol (TCP) connection to a particular port on a host (port 80 by default; see List of TCP and UDP port numbers). An HTTP server listening on that port waits for the client to send a request message. Upon receiving the request, the server sends back a status line, such as "HTTP/1.1 200 OK", and a message of its own, the body of which is perhaps the requested resource, an error message, or some other information.

The request message consists of the following:

The request line and headers must all end with <CR><LF> (that is, a carriage return followed by a line feed). The empty line must consist of only <CR><LF> and no other whitespace. In the HTTP/1.1 protocol, all headers except Host are optional.

A request line containing only the path name is accepted by servers to maintain compatibility with HTTP clients before the HTTP/1.0 specification in RFC1945[3]. 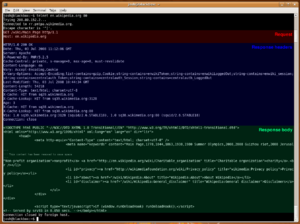 An HTTP request made using telnet. The request, response headers and response body are highlighted.

HTTP defines eight methods (sometimes referred to as "verbs") indicating the desired action to be performed on the identified resource. What this resource represents, whether pre-existing data or data that is generated dynamically, depends on the implementation of the server. Often, the resource corresponds to a file or the output of an executable residing on the server.

HEAD
Asks for the response identical to the one that would correspond to a GET request, but without the response body. This is useful for retrieving meta-information written in response headers, without having to transport the entire content.

GET
Requests a representation of the specified resource. Note that GET should not be used for operations that cause side-effects, such as using it for taking actions in web applications. One reason for this is that GET may be used arbitrarily by robots or crawlers, which should not need to consider the side effects that a request should cause. See safe methods below.
POST
Submits data to be processed (e.g., from an HTML form) to the identified resource. The data is included in the body of the request. This may result in the creation of a new resource or the updates of existing resources or both.
PUT
Uploads a representation of the specified resource.
DELETE
Deletes the specified resource.
TRACE
Echoes back the received request, so that a client can see what intermediate servers are adding or changing in the request.
OPTIONS
Returns the HTTP methods that the server supports for specified URL. This can be used to check the functionality of a web server by requesting '*' instead of a specific resource.
CONNECT
Converts the request connection to a transparent TCP/IP tunnel, usually to facilitate SSL-encrypted communication (HTTPS) through an unencrypted HTTP proxy.[4]

HTTP servers are required to implement at least the GET and HEAD methods HTTP 1.1 Section 5.1.1 and, whenever possible, also the OPTIONS method.[citation needed]

Some methods (for example, HEAD, GET, OPTIONS and TRACE) are defined as safe, which means they are intended only for information retrieval and should not change the state of the server. In other words, they should not have side effects, beyond relatively harmless effects such as logging, caching, the serving of banner advertisements or incrementing a web counter. Making arbitrary GET requests without regard to the context of the application's state should therefore be considered safe.

By contrast, methods such as POST, PUT and DELETE are intended for actions which may cause side effects either on the server, or external side effects such as financial transactions or transmission of email. Such methods are therefore not usually used by conforming web robots or web crawlers, which tend to make requests without regard to context or consequences.

Despite the prescribed safety of GET requests, in practice their handling by the server is not technically limited in any way, and careless or deliberate programming can just as easily (or more easily, due to lack of user agent precautions) cause non-trivial changes on the server. This is discouraged, because it can cause problems for Web caching, search engines and other automated agents, which can make unintended changes on the server.

In HTTP/1.0 and since, the first line of the HTTP response is called the status line and includes a numeric status code (such as "404") and a textual reason phrase (such as "Not Found"). The way the user agent handles the response primarily depends on the code and secondarily on the response headers. Custom status codes can be used since, if the user agent encounters a code it does not recognize, it can use the first digit of the code to determine the general class of the response 6.1 Status-Line.

In HTTP/0.9 and 1.0, the connection is closed after a single request/response pair. In HTTP/1.1 a keep-alive-mechanism was introduced, where a connection could be reused for more than one request.

Such persistent connections reduce lag perceptibly, because the client does not need to re-negotiate the TCP connection after the first request has been sent.

Version 1.1 of the protocol made bandwidth optimization improvements to HTTP/1.0. For example, HTTP/1.1 introduced chunked transfer encoding to allow content on persistent connections to be streamed, rather than buffered. HTTP pipelining further reduces lag time, allowing clients to send multiple requests before a previous response has been received to the first one. Another improvement to the protocol was byte serving, which is when a server transmits just the portion of a resource explicitly requested by a client.

HTTP is a stateless protocol. The advantage of a stateless protocol is that hosts do not need to retain information about users between requests, but this forces web developers to use alternative methods for maintaining users' states. For example, when a host needs to customize the content of a website for a user, the web application must be written to track the user's progress from page to page. A common method for solving this problem involves sending and receiving cookies. Other methods include server side sessions, hidden variables (when the current page is a form), and URL encoded parameters (such as /index.php?session_id=some_unique_session_code).

HTTPS: is a URI scheme syntactically identical to the http: scheme used for normal HTTP connections, but which signals the browser to use an added encryption layer of SSL/TLS to protect the traffic. SSL is especially suited for HTTP since it can provide some protection even if only one side of the communication is authenticated. This is the case with HTTP transactions over the Internet, where typically only the server is authenticated (by the client examining the server's certificate).

The server returns a 426 status-code because 400 level codes indicate a client failure (see List of HTTP status codes), which correctly alerts legacy clients that the failure was client-related.

The benefits of using this method for establishing a secure connection are:

A weakness with this method is that the requirement for a secure HTTP cannot be specified in the URI. In practice, the (untrusted) server will thus be responsible for enabling secure HTTP, not the (trusted) client.

Below is a sample conversation between an HTTP client and an HTTP server running on www.example.com, port 80.

Client request (followed by a blank line, so that request ends with a double newline, each in the form of a carriage return followed by a line feed):

The "Host" header distinguishes between various DNS names sharing a single IP address, allowing name-based virtual hosting. While optional in HTTP/1.0, it is mandatory in HTTP/1.1.

Server response (followed by a blank line and text of the requested page):

The ETag (entity tag) header is used to determine if a cached version of the requested resource is identical to the current version of the resource on the server. Content-Type specifies the Internet media type of the data conveyed by the http message, while Content-Length indicates its length in bytes. The HTTP/1.1 webserver publishes its ability to respond to requests for certain byte ranges of the document by setting the header Accept-Ranges: bytes. This is useful if the client needs to have only certain portions[5] of a resource sent by the server, which is called byte serving. When Connection: close is sent in a header, it means that the web server will close the TCP connection immediately after the transfer of this package.